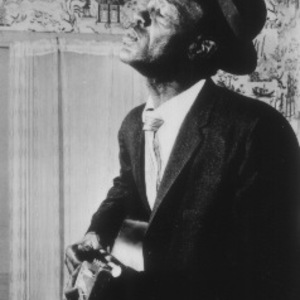 Sam Hopkins was born on March 15, 1912 in Centerville, Texas. In 1920, at the age of eight, Hopkins met and played with the legendary Blind Lemon Jefferson, even becoming Jefferson's guide for a short time. Hopkins' cousin, the great bluesman, Texas Alexander, was another influence. Their musical partnership was broken up by Hopkins' time in Houston's County Prison Farm during the 1930s. When Hopkins made his way to Houston's Third Ward in 1946 he was introduced to Lola Anne Cullum, a talent scout who had pieced together deals with companies such as Aladdin Records out of Los Angeles.

When Hopkins made his way to Houston's Third Ward in 1946 he was introduced to Lola Anne Cullum, a talent scout who had pieced together deals with companies such as Aladdin Records out of Los Angeles. She paired up Hopkins with a piano player by the name of Wilson "Thunder" Smith and came up with the name "Lightnin'" as an obvious match. It stuck.

Hopkins had no little success with a release named "Katie May," cut on November 9, 1946. After that came a series of releases on the Aladdin label - "Shotgun Blues," "Short Haired Woman," "Abilene" and "Big Mama Jump." The blues floodgate had opened. What followed was more than thirty years of albums on everything from small, obscure labels to big ones. The list includes Modern/RPM, Gold Star, Mercury, Jax, Decca, Astan, and Herald. During this period he cut some of the most ferocious blues guitar mixed with what he called "air songs," meaning those where he'd just pull the lyrics right out of the air on the spot.

Hopkins' career faded until a folklorist by the name of Mack McCormick rediscovered him and presented him under the growing label of "folk artist." It made no difference to Lightnin' what they called him, he played as he always had. In 1959 he worked with Sam Charters on Folkway Records to record a groundbreaking solo album in Hopkins' apartment on a borrowed guitar. Again, Hopkins' career was off and running "like a turkey through the corn."

More albums than can be counted followed, including those on labels such as Candid, Arhoolie, Prestige, Verve, Jewel, World Pacific, Bluesville, Fire and Vee-Jay. For an upfront fee, the whiskey- or gin-flavored albums were often recorded by tiny, obscure one-person labels. Since Hopkins had the gift of the air song, he had no shortage of material. The songs would range from intense, deep-tissue blues to some of the more surrealistic ever recorded as he reached for rhymes.

An apocryphal story of Hopkins as a performer involved Billy Gibbons of ZZ Top. Supposedly, Gibbons heard Hopkins play at a coffeehouse and muttered, "He doesn't even know when to change chords." Hopkins was standing behind Gibbons and leaned forward, surprising the teenager with "Lightnin' change when Lightnin' want to."

Indeed, Hopkins had a bag of licks and patterns that fit largely into two divisions -- slow E and Fast E - with an occasional venture into A. His rhythm and the chord changes went with his feelings at that moment in time and, as such, made it difficult for other musicians to follow. With a few exceptions, his recordings with hired bands later in his life become hopelessly entangled - to quote a Hopkins song - "like a ball of twine."

Abc Of The Blues CD15

Lightnin' and the Blues

In The Key Of Lightnin'

The Best Of Lightning Hopkins

The Very Best Of Lightnin' Hopkins