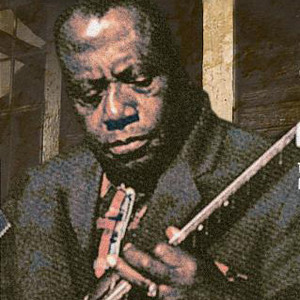 Booker T. Washington "Bukka" White (November 12, 1906? February 26, 1977) was a delta blues guitarist and singer born in Aberdeen, Mississippi. Even though he didn't like the spelling "Bukka", he was best known by that name. He gave his more famous cousin B.B. King his first guitar, a Stella. Bukka himself is remembered as a player of National Steel guitars. He also played, but was less adept at, the piano.

White started his career playing fiddle at square dances. He met Charley Patton early on, although some doubt has been cast upon this; regardless, Patton was a large influence on White. He typically played slide guitar, in an open tuning. He was one of the few, along with Skip James, to use a crossnote tuning in Em, which he may have learned, as James did, from Henry Stuckey.