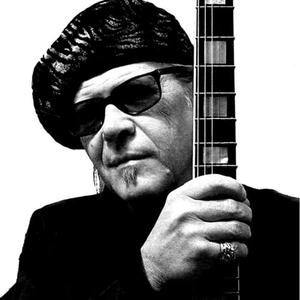 GRAMMY nominated, two time winner of the prestigious W.C. HANDY AWARD for ?BLUES BAND OF THE YEAR?, JAMES SOLBERG is now releasing his long awaited fifth solo release, ?REAL TIME?, on the BLUES ECLIPSE label. Already being referred to as ?unlike any blues record you've ever heard? this incredible CD is the culmination of JAMES' ?extraordinary guitar work, vocals and stellar songwriting?. Born in 1951, James first learned to play 5-string banjo, violin and guitar as a young kid. His real musical career began in the mid?60s while performing in R&R cover bands around the Midwest.

At age 15 he left school and headed for the source of the music he loved most?Chicago. He got to be friends with EDDIE TAYLOR, who showed him a lot of tricks on guitar. During this time, Solberg played with JOHNNY YOUNG, BIG WALTER HORTON and JIMMY REED, as well as with TAYLOR. Moving to Milwaukee in the early ?70s he formed a rockin' blues band with JOHNNY WINTER bassist JON PARIS. Also living in Milwaukee at that time was LUTHER ALLISON, just signed to the MOTOWN label, who would frequent the Monday night jams held at BROTHERS LOUNGE. SOLBERG and PARIS were soon opening for LUTHER on the college ?showcase? circuit and before long JAMES became a member of LUTHER'S band. Touring together from ?75 till '79, they released ?NIGHTLIFE? and ?LUTHER ALLISON THE MOTOWN YEARS 1972-1976? (Motown- the latter released in '94), ?LIVE AT MONTREAUX '76-?94? (released in '95), ?LIVE IN PARIS? and ?LUTHER ALLISON LIVE?.
The next three years, JAMES was touring with ?Midwest legends? SHORT STUFF, including JUNIOR BRANTLEY, (THE FABULOUS THUNDERBIRDS and JIMMY VAUGHN) and harp virtuoso JIM LIBAN and recorded the album ?TALK IS CHEAP?, the title track later recorded by guitar legend, JOHNNY WINTER.
In 1981, after a decade of touring more than 300 one niters a year, SOLBERG packed it up and headed for the ?North Country? to ride and build Harleys and Indians. As a machinist and mechanic at the local Harley dealership he began designing and fabricating his own innovative MC parts.
Having ?dried out? JAMES was back on the road with THE LEGENDARY BLUES BAND, featuring MUDDY WATERS' alumni, PINETOP PERKINS, WILLIE SMITH, CALVIN JONES and JERRY PORNOY. (ERIC CLAPTON) In 1986 and '87 JAMES was touring with THE NIGHTHAWKS and ELVIN BISHOP. At this time, James fired up the JAMES SOLBERG BAND who's members included ROBB STUPKA on drums, MIKE VLAHAKIS on keys and KEN FALTINSON on the bass, all later to become the touring and recording unit for LUTHER ALLISON AND THE JAMES SOLBERG BAND.
One of their first gigs as THE JAMES SOLBERG BAND found them at a posh night spot in Eau Claire, WI known as THE STONES THROW, where after a late night poker game following the gig, JAMES walked out owning the place! From 1987 through 1993 JAMES had a run of success which included appearances of virtually every major blues act currently on the road. While still touring occasionally, JAMES and the band never missed their weekly appearance at the club for the ?WEDNESDAY NITE BLUES PARTY?. One of those acts to make appearances at THE STONES THROW was JAMES' ol' soul mate, LUTHER ALLISON who in 1993, desiring to return from his long and successful hiatus overseas, approached JAMES with the idea to reunite and ?conquer the USA?. Soon, LUTHER ALLISON AND THE JAMES SOLBERG BAND would be headlining almost every major festival stage in the world! Before LUTHER?S untimely death in ?97, LUTHER and JAMES began a ?tour de force? that included the recordings often referred to as ?the best three contemporary back to back blues albums of all time?. ?SOUL FIXIN' MAN?, ?BLUE STREAK?, and ?RECKLESS? won innumerable awards and accolades around the world. Considered ?the definitive live record?, ?LIVE IN CHICAGO?, was released posthumously, and also received W.C. HANDY AWARDS and GRAMMY nominations, as well as critical acclaim for LUTHER ALLISON and JAMES SOLBERG'S Creative work together. JAMES was there for all of it! JAMES the songwriter, JAMES the guitarist, JAMES the producer, arranger and bandleader.
All during this period JAMES somehow found the time to release even more well received and critically acclaimed albums of his own. ?SEE THAT MY GRAVE IS KEPT CLEAN? and ?ONE OF THESE DAYS?, were each touted as ?one of the best releases of the year?, respectively.
Shortly following LUTHER'S death, feeling the need to ?say something?, JAMES was back in the studio recording ?L.A. BLUES?, a cathartic tribute album conveying his suffering and anguish at the loss of his close friend and partner. One of the cuts from that session found its way on ?TANGLED UP IN BLUES: THE SONGS OF BOB DYLAN?. SOLBERG'S rendition of ?BALLAD OF A THIN MAN? being hailed as ?one of the strongest, most honest tracks? on the CD. Typical of his arranging and performing skills, he ?grasped all the implications of DYLAN'S recording and then cranked them all up to a higher level, both instrumentally and vocally?. Another powerful release, ?THE HAND YOU'RE DEALT? followed in 2000, expanding the diversity and prowess of his songs, guitar work and touching on the emotional highs and lows that accompany the sounds of Soul, R&B, Gospel and hard-drivin' blues.
Besides being a gifted musician, SOLBERG is also talented in helping other musicians sound good. Besides his work with ALLISON, he has arranged, written, produced, as well as played guitar on CDs for DEBORAH COLEMAN, THE NIGHTHAWKS, SANDY CARROLL, JAY STULO, BONNIE LEE and BARKIN' BILL SMITH, to name a few. He has a ?love for the creative process? and feels he's ?good at getting the most out of a musician?, being able to convey their message with a greater clarity after listening to their ideas. Despite his extra musical foray, the true artist within him states that ?nothing beats doin' it live?.

Whenever Luther Allison toured the U.S. in the '90s, he was backed by the Jim Solberg Band. Solberg and Allison had a long, friendly working relationship that dates back to the early '70s, when Allison was living in Milwaukee.

Solberg, a talented guitarist, singer, and songwriter, frequently co-wrote with Allison, but since Luther spent a good portion of each year in Europe, touring out of his home in Paris, Solberg toured with his band under his own name when Allison was not around. In the late '90s, Solberg released several albums under his own name for the Atomic Theory label. The records drew high praise from critics, and well they should have -- Solberg was no spring chicken when it comes to playing blues and touring. He has broken many a guitar string and logged thousands of miles in his van since he started to get serious about the music in the late '60s.

Solberg was raised in Eau Claire and Milwaukee, WI, and worked in various psychedelic blues cover bands (fashionable in the late '60s) before moving to Vancouver, B.C. as a conscientious objector in 1968. After returning to the U.S. after the war, Solberg formed a band called Whirlhouse. That group didn't last very long, and in 1970, he toured with the Sam Lays Blues Band, which included Big Walter "Shakey" Horton, Eddie Taylor, and Johnnie Young. In 1972, working with bassist Jon Paris, he formed a band called Dynamite Duck. Paris would later go on to accompany Johnny Winter as bassist for the next 14 years. Beginning in 1975, Solberg toured with Jimmy Reed and began his full-time association with Allison. Solberg and his bands backed Allison from 1975 to 1979, pausing only to tour with John Lee Hooker, whom Solberg would rejoin for another tour in 1981. After Allison relocated permanently to Paris, Solberg worked with the Milwaukee group Short Stuff, a group led by harp player Jim Liban.

In the '80s, Solberg toured with Hooker, the Legendary Blues Band, the Nighthawks, and Elvin Bishop, among others. In 1987, Solberg opened his own club, the Stone's Throw, in Eau Claire, WI.

After Allison signed to the Chicago-based Alligator Records in 1993, the Jim Solberg Band, in its then-incarnation, renewed its relationship with Allison, acting as his touring band on domestic dates and select overseas shows. Much of Allison's debut for Alligator, Soul Fixin' Man (1993), was co-written and arranged by Solberg. Solberg, a true blues veteran, was also heavily involved in the songwriting and arranging for Allison's two final albums for Alligator, Blue Streak (1996) and Reckless (1997). L.A. Blues, his first for the RUF label, followed in 1998, and two years later, Solberg returned with The Hand You're Dealt.

The Hand You're Dealt