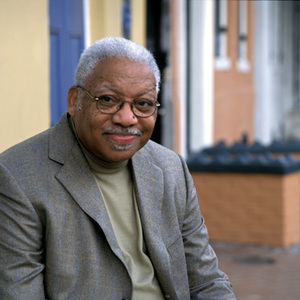 Ellis Marsalis is regarded by many as the premier modern jazz pianist in New Orleans. Born on November 14, 1934, he began formal music studies at the Xavier University junior school of music at age eleven. After high school Marsalis enrolled in Dillard University (New Orleans) as a clarinet major. He graduated with a Bachelor of Arts degree in music education in 1955. Marsalis spent the next year working as an assistant manager in his fathers motel business.

The following year Marsalis then joined the U.S. Marine Corps and while stationed in southern California began honing his skills as a pianist on a television show entitled "Dress Blues" and a radio show called "Leatherneck Songbook". Both shows were sponsored by the Marine Corps. After completing a stint in the Marine Corps Marsalis returned to New Orleans and married Dolores Ferdinand, a New Orleanian, who bore him six sons; Branford, Wynton, Ellis III, Delfeayo, Miboya and Jason.

In 1964 Marsalis moved his wife and family of, at at time, four sons to the small rural Louisiana town of Breux Bridge where he became a school band and choral director at Carver high school for two years. Returning to New Orleans he began to freelance once again on the local music scene. Between 1966 and 1974 Marsalis would perform at the Playboy Club (New Orleans), in the Al Hirt night club, Lu and Charles night club and enter the teaching profession again as an adjunct professor at Xavier University(New Orleans).

While the family continued to grow Marsalis decided to return to school in the early summer session of 1974 working towards a Masters Degree at Loyola University(New Orleans). Marsalis would also interview for a teaching position at a new Magnet school for the arts. his interview was successful and he was hired in the Fall semester at the New Orleans Center for Creative Arts(1974) high school. He would spend the next twelve years at NOCCA as an instrumental music teacher with a Jazz studies emphasis.

In 1986 Marsalis accepted the position of Commonwealth Professor at Virginia Commonwealth University in Richmond, Virginia. He would spend two of the three years as coordinator of Jazz Studies before returning to New Orleans and the University of New Orleans to become the first occupant of the CocaCola endowed chair of Jazz Studies as the director.

Marsalis has been the recipient of Honorary Doctorate degrees from his alma mater Dillard University, (1989) and Ball State University, Muncie, Indiana(1997).

Marsalis has been a guest on several network television shows. He has appeared on NBC's "TODAY" with host Bryant Gumbel; the "TONITE" show with both Johnny Carson and Jay Leno as hosts; the Arsenio Hall show with pianist Marcus Roberts; The Charlie Rose show; Mr. Rogers' Neighborhood; ABC's GOOD MORNING AMERICA with Spencer Christian and several local and regional television shows. In 1984 Marsalis and New Orleans singer/actress Joanne "Lady BJ" Creighton shared honors at the Ace Awards ceremony for the best single music program on cable television. Marsalis continues to be active as a performing pianist leading his own group and has several recordings on the CBS-SONY label. He is currently developing his own recording label, ELM RECORDS, with his wife Dolores and son Jason.

On August 10, 2001 Marsalis officially retired from the University of New Orleans after twelve years as the first occupant of the CocaCola Jazz Chair and the Director of the Jass Studies Division.

On The First Occasion

Pure Pleasure For The Piano

An Evening With The Ellis Marsalis Quartet: Set 1