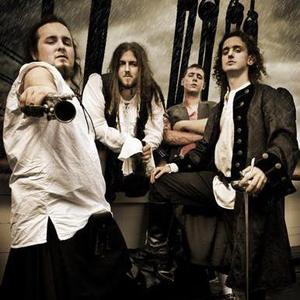 Alestorm is a folk metal band from Perth, Scotland. Their music is characterized by a pirate theme, and as a result have been dubbed a pirate metal band on a popular heavy metal related website. They refer to their genre as "True Scottish Pirate Metal". The band formed under the name Battleheart in 2004. After releasing two EPs, they were signed by napalm records in 2007 and renamed themselves Alestorm. Their debut album was released on 25 January 2008. The band's third album, Back Through Time, was released in June 2011.

The band formed under the name Battleheart in 2004. After releasing two EPs, they were signed by napalm records in 2007 and renamed themselves Alestorm. Their debut album was released on 25 January 2008. The band's third album, Back Through Time, was released in June 2011.

Originally starting out as a two piece band Gavin Harper and Christopher Bowes, Battleheart recorded an independent EP in Gavin's home studio in early 2006. The band was soon rounded out after some early rotation by bassist Dani Evans and drummer Doug Swierczek. Battleheart played their first live show only five days after the members had all met together for the first time.

A second EP was recorded the same year, with Evans now featuring in the recording line-up (the drums were again programmed). Later in the year, the song "Set Sail And Conquer" from the EP was featured on Metal Hammer's "Battle Metal V" cd with other such bands as T?r, Firewind, Hammerfall and Blind Guardian.

In early 2007, drummer Doug Swierczek departed from the band and was replaced by the band's friend Ian Wilson of the band Catharist. Later in the year the band changed their name to Alestorm and were signed by Napalm Records. A debut album, "Captain Morgan's Revenge" was released in early 2008. The song "Captain Morgan's Revenge" was also featured on "Metal Hammer's Battle Metal VI".

Ian Wilson left Alestorm following the release of the debut album due to scheduling conflicts. He was replaced by Alex Tabisz, but by August that year had rejoined the band. The following month founding member Gavin Harper departed after relocating to Finland. After a brief period of touring with Tim Shaw as his replacement, Dani Evans switched instruments from bass to guitar.

In April 2008 the single Heavy Metal Pirates was released as a digital download. Ian Wilson left Alestorm in June of that year as he was unable to commit fully to the band, and he was temporarily replaced by German Alex Tabisz. However, Wilson rejoined the band in late August, in time for a show at Ivory Blacks in Glasgow on August 29.

In September 2008, Bowes announced on Bloodstock's official forums that guitarist Gavin Harper had left the band due to "[Harper] no longer having the enthusiasm for Alestorm that he once had". Additionally, Gavin posted on Alestorm's Myspace referring to his departure. Tim Shaw was announced as Harper's replacement, but after a brief period of touring left the band. Dani Evans has since switched instruments from bass to guitar, and Gareth Murdock of Waylander has joined as the replacement bassist.

In late February 2009, after a second European support tour, the band embarked on the Pagan Knight's tour across North America with T?r and Suidakra.

From April to May 2009, Alestorm, T?r, Heidevolk, and Adorned Brood took part in another European tour, titled "Black Sails Over Europe". A tour CD was released by Napalm Records, containing new tracks from both Alestorm and T?r's new albums, along with four songs taken from both of Heidevolk's albums. Only 1,000 of these CDs were produced.

A second album, Black Sails at Midnight, was released in May 27, 2009. As with their first album, all the drums tracks were recorded by session drummer Migo Wagner but touring drummer Ian Wilson added some additional percussion. The special edition of the album came with a live dvd of the band's performance at the 2008 Wacken Festival. A music video was shot for the song "Keelhauled". Alestorm played two additional tours in 2009; Paganfest in Europe and Heathenfest in the United States.

In 2010, Alestorm played a few shows as guests on selected dates of the Paganfest tour through Europe. That tour was headlined by Finntroll and Eluveitie. From 17 to 20 June 2010, Alestorm played various shows around Australia. In late 2010, Alestorm toured the UK along with Sabaton,[19] (they also played together with Sabaton at their hometown festival of Falun named Rockstad: Falun during the 28?29 May) as well as playing at Hard Rock Hell: Road Trip in Ibiza. On 24 September, Alestorm played a new song from their third album called "Rum" live in Karlstad, Sweden in support of Sabaton's World War Tour. On 17 October, they played a cover of a Gloryhammer (a side project of keytarist Christopher Bowes) song called "The Unicorn Invasion of Dundee" in Brighton, England.

In order to promote their third studio album Back Through Time, Alestorm is going on a Back Through Time World Tour. The first part of the tour was held in Australia and New Zealand from 10 until 15 May.

Chicken On A Raft (CDS)

No Grave But The Sea CD2

No Grave But The Sea CD1