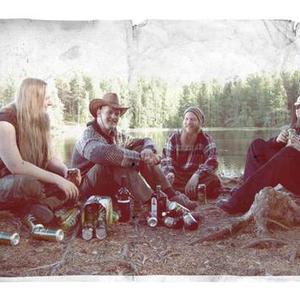 With a line up that includes musicians from bands as varied as URGEHAL, PANTHEON I, UNTIME, MELCH, HALLUCINATIONS, POWERSWORD and SARKOM, TROLLFEST's members bring with them not only a wealth of experience and the skill to make use of instruments like the accordion, the banjo and the saxophone, but also a sense of diversity that allows the band to create a sound that is distinctly its own. Whilst ?True Norwegian Balkan Metal? goes some way towards describing the TROLLFEST sound - hinting as it does at the extreme end of metal...

Formed in 2004, in Oslo, Norway, when a bunch of musicians became bored with the selection of party music that was available to them, and, helped along by the consumption of large quantities of alcohol, the soon-to-be members of TrollfesT decided to take matters into their own hands. One website and six songs later, a German label, which at the time was called Solistium, recognised the potential in the madness and got in touch. With the immortal words ?what the heck, let's give it a go? TrollfesT agreed to a deal and started writing new material. By 2005 ?Willkommen Folk tell Drekka Fest!!? hit the streets. And life as we know it was never the same again.

Containing a selection of sounds and comments, many of which you would not necessarily come across if you only frequented polite parties, ?Willkommen?? displayed some unique qualities that caught people's attention and consequently sold rather a lot of copies, so a deal for a second album was signed and in 2006 the story of Brakebein the Troll was released. ?Brakebein? (not a bad choice for a title really given its subject matter), appeared in two versions - one that included a cartoon illustrating Brakebein's voyage, and the other that included the lyrics.

During the first years, TrollfesT never actually played live, but nevertheless the two albums succeeded in making the band a sought after addition to festivals, and the first foray beyond the planning stage occurred in 2007 as one of the headlining bands at the Ninth Barther Metal Open Air Festival. TrollfesT then went on to headline and play various festivals and concerts around Europe during 2007/08 including the Ragnar?k and Riedfest festivals.

January 2009 saw the release of TrollfesT's third studio album ?Villanden?. A much-anticipated underground album according to feedback from the fans, ?Villanden? was quickly acknowledged as one of the craziest albums to have been released in a very long time, mixing, as it did, European Balkan music with extreme metal, and spread rapidly through the viral networks like YouTube, MySpace and Facebook.

2011 saw TrollfesT sign with NoiseArt Records for the release of the new album ?En Kvest For Den Hellige Gral? and with Rock The Nation for world-wide booking. Tours and festival appearancs quickly followed demonstrting that as a live force TrollfesT is hard to beat. 2012 will see the release of ?Brumlebassen?, the band's fifth full-length album, and extensive tours have already been set.

So how would anyone, in their right mind, or otherwise, dare to define TrollfesT? The closest you would come is probably True Norwegian Balkan Metal, but even then you would need to include influences from lots more genres. The best way to put it is that this band is all about alcohol, joy and music, three subjects that draw in fans from all ages and genres, eager to listen to TrollfesT's records and witness the exuberant and skilled live performances.