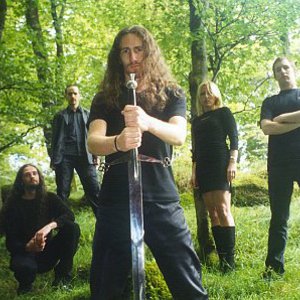 Cruachan (kroo-a-khawn) is a celtic and black metal band from Dublin, Ireland that has been active since the 1990s. They have been acclaimed as having "gone the greatest lengths of anyone in their attempts to expand" the genre of folk metal. They are recognised as one of the founders of the genre of folk metal. With a specific focus on celtic music and the use of Celtic mythology in their lyrics, Cruachan's style of folk metal is known as Celtic metal. The band named themselves after the archaeological site of Rathcroghan in Ireland also known as Cruachan.

Keith Fay had formed a Tolkien-inspired black metal band by the name of Minas Tirith in 1991. Around the same time, he began listening to more folk music and picked up Skyclad's debut album the wayward sons of mother earth. Originally released in 1990, this "ambitious" and "groundbreaking" album made an impact on Fay and he set out to combine black metal with the folk music of Ireland. In 1992, Keith Fay formed Cruachan with a demo recording distributed in 1993. Keith Fay also credits the Irish rock band Horslips as a "huge influence on Cruachan," further noting that "what they were doing in the 70's is the equivalent of what we do now."

The year 1995 saw the release of Cruachan's debut album Tuatha Na Gael, an album that "suffered under poor production." On the strength of this album, the band received attention from Century Media. The band found it amazing to receive interest from "such a big label" but were dismayed at the terms and conditions of the offered recording deal. They refused to sign a "very poor contract" that would have given the record label "the rights to change every aspect of our music." After "lengthy negotiations failed to yield a deal with Century Media Records", the band disbanded in 1997.

Cruachan reformed in January 1999 and after signing a recording deal with Hammerheart Records, they released a second album The Middle Kingdom in 2000. By this time, the band had dropped the black metal style in favor of a more traditional metal sound. They also expanded the roster by inviting guest vocalist Karen Gilligan to be a full-fledged member of the group. Their subsequent album Folk-Lore was co-produced by Shane McGowan of The Pogues fame. Shane McGowan also contributed vocals to two covers of traditional Irish songs, "Spancill Hill" and "Ride On." The latter was released as a single and the band experienced a small taste of commercial success when it entered the Irish charts.

The band released their fourth studio album Pagan in 2004 with cover artwork by John Howe. The production on the album was subsequently criticized by frontman Keith Fay as "terrible". In 2005, the band parted ways with their label Karmageddon Media "on good terms." For the band's fifth album, Cruachan returned to the same Sun Studios where they had recorded their first three albums. The result was The Morrigan's Call, an effort that Keith Fay described as their "best work to date, in every aspect." The album was released in November 2006 through AFM Records. Drummer Joe Farrell left the band shortly thereafter due to "personal reasons" and was replaced by Colin Purcell.

A further line-up change occurred in December 2008 as vocalist Karen Gilligan left the band "on good terms for various reasons." Keith Fay announced that he "will take over full-time vocal duties while John Ryan and John O' Fathaigh will take on backing vocal roles."

A demo was recorded in 2010 which showed Cruachan's return to a much harder more Black Metal influenced style. This demo was sent to specific record labels only and Candlelight Records UK signed Cruachan in June 2010. The latest Cruachan album, Blood on the Black Robe, was released in 2011.

Blood On The Black Robe