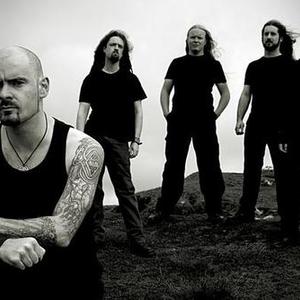 Primordial is a folk metal / pagan black metal band founded in 1987 in Skerries, County Dublin, Ireland. They play a unique style of pagan metal, which can best be described as a blend of black and celtic folk metal with strong influences from their Irish roots. Their lyrics deal with cultural heritage, history and struggle. Primordial started out as a black metal band with some folk influences with their 1993 demo "Dark Romanticism" and 1995 debut album "Imrama".

Primordial started out as a black metal band with some folk influences with their 1993 demo "Dark Romanticism" and 1995 debut album "Imrama". With the 1998 album "A Journey's End", Primordial underwent a strong stylistic change and delivered an album that was more original, personal and darker than anything they had done before. The different musical influences become more intertwined than ever before.

The trademark Primordial style become most apparent on the EP "The Burning Season" and "Spirit the Earth Aflame", their third full length album. This line was continued in the somewhat harsher album "Storm Before Calm" from 2002. The fifth album, "The Gathering Wilderness" was released in January 2005 and was highly regarded by critics around the globe. This album shows further musical progression and a return in pessimistic feeling to "A Journey's End".

Exile Amongst the Ruins

Where Greater Men Have Fallen

Redemption at the Puritans Hand

To The Nameless Dead