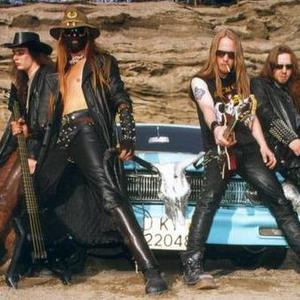 Nocturnal Breed are a blackened thrash metal band from Oslo, Norway. The band was formed in 1996 by singer/bassist S. A Destroyer (Gehenna/Satyricon) and guitarist Ed Damnator aka Silenoz (Dimmu Borgir). Within six months, demo recordings Raping the Angels and Black Cult were hatched, from which several tracks made it on to different compilations. A collaboration with Dutch label Hammerheart Records would result in Nocturnal Breed's first official release, Aggressor in October 1997.

The band was formed in 1996 by singer/bassist S. A Destroyer (Gehenna/Satyricon) and guitarist Ed Damnator aka Silenoz (Dimmu Borgir). Within six months, demo recordings Raping the Angels and Black Cult were hatched, from which several tracks made it on to different compilations.

A collaboration with Dutch label Hammerheart Records would result in Nocturnal Breed's first official release, Aggressor in October 1997. Aggressor was recorded at Gordon Studios in Oslo and featured session-members Astennu (lead guitars) and Rick Hellraizer (drums). The release kicked off a tour throughout Europe the very same fall, with Emperor and Bal Sagoth to complete the triple bill. Axeman I. Maztor and drummer Andy Michaels were hired to integrate Nocturnal Breed's line-up for this tour. In addition to the Aggressor release, a 10" vinyl entitled Raping Europe '97, was printed exclusively as a fan-treat for the audience.

The tour was a success encouraging the band to start working on material for the next full-length the second they got off the bus back home. Meanwhile, Hammerheart Records released the mini-album Triumph of the Blasphemer, which contains live-tracks from the tour, leftover-material from the Aggressor sessions as well as a WASP cover.

I. Maztor became a full-time member of Nocturnal Breed, while drummer Andy Michaels gave up his chair to Tex Terror. The four-piece recorded their much acclaimed full-length No Retreat? No Surrender at Gordon Studios in spring of 1998 and was also released through Hammerheart Records later that year. Ed Damnator left the band after the recordings and was replaced by Ben Hellion, a long-time friend of S. A. Destroyer.

To promote the new release, the band set off on a second European tour which would be the breaking point in the Hammerheart collaboration. The company's lack of support compelled Nocturnal Breed to leave the label and start recording new material, this time with no label to back it up. A three months session at Gordon Studios resulted in third full-length, The Tools of the Trade, which would be released through US label Holycaust Records in late 2000. The deal with Holycaust Records also included re-mastered versions of all previous releases, with new covers and booklets. This part of the deal never materialized, The Tools of the Trade was never distributed outside the US, and yet again Nocturnal Breed would have to look for other business interests who would match up to the band's ambitions.

Belgian label Painkiller Records got the job to re-release The Tools of the Trade, as well as releasing the 2005 Limited Edition Box-Set The Remasters, which contains the whole back-catalogue re-mastered, with new covers and booklets packed with fresh liner-notes. This box-set also consists of more than ten previously unreleased tracks.

Having left the band in 2001, I. Maztor was replaced by lead-guitarist T. Thrawn (Paradigma/DHG) who'd also mastered all of Nocturnal Breed's previous releases. T. Thrawn participated on 7" compilations ?berthrash I and ?berthrash II, which were released through Norwegian label Duplicate Records. These vinyl releases also include Norwegian acts Audiopain, Aura Noir and Infern?.

Due to internal conflicts, T. Thrawn left Nocturnal Breed in 2005. He was replaced by A. E. Rattlehead (Cockroach Clan/Crest of Darkness) just weeks before the band started writing and recording new full-length Fields of Rot at Deadringer Studios, www.deadringerstudios.com.

This time, a change of production participants and more pungent work ethics have taken Nocturnal Breed's power-chord driven misanthropy to a new level.

We Only Came For The Violence

No Retreat ... No Surrender