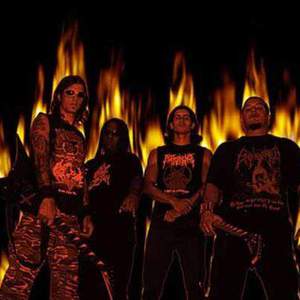 Rebaelliun was a Brazilian Death Metal band that was founded in 1998 by singer/bassist Marcello Marzari, guitarrists Fabiano Penna and Ronaldo Lima, and drummer Sandro Moreira. After the released of their promo tape '98, the band was contracted by the Dutch label Hammerheart Records, who released their debut album "Burn the Promised Land" in 1999. The release was followed by a European tour. The band recorded an EP for "Bringer of War", featuring a Morbid Angel cover. Shortly thereafter a second album was released "Annihilation" which was followed by a second European tour.