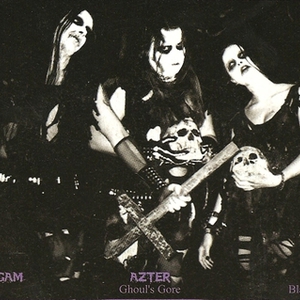 Denial of God is a Melodic Black Metal band from Denmark - formed in 1991 of July 5th. They were formed by the brothers Ustumallagam (vocals) and Azter (guitar, who were the only remaining members of the original lineup along with a drummer named Uksul. They are highly based off of horror and witches, inspired by a variety of artists such as; Alice Cooper, King Diamond, Mercyful Fate, Death SS, Mayhem, Bathory, Infern?l M?jesty and Hellhammer and ideologies pertaining to horror, satanism and the occult and supernatural.

They are highly based off of horror and witches, inspired by a variety of artists such as; Alice Cooper, King Diamond, Mercyful Fate, Death SS, Mayhem, Bathory, Infern?l M?jesty and Hellhammer and ideologies pertaining to horror, satanism and the occult and supernatural.

The band started writing their first early material in 1992, which ends up on the band's first demo tape entitled "Oscularium Infame" which was released later that summer. Since they needed a bassist for the demo they decided to hire Kulmar. The rehearsal was recorded through a tape recorder. However, the sound turns out with a poor quality.

A lot of "trve" metalheads enjoyed the demo but, a few disliked. But, in spite of the "haters" the band shows that they do not care about them and think of those as having industrialized tendencies. They follow the metal way, musically as well as lyrically and even image-wise.

The band's message will appear to be different from modern civilization and may even include older ideas in their whole band theme. For example; most bands will deliver stripped down shows but, Denial of God would inflict a supernatural vibe during their shows. It might even be described as a preserved antiquity of modern culture. Their themes of horror and Satanism have stumbled some people, who have inquired why the frequent use of horror make-up and Satanic approaches are necessary. Thus, causing controversy.

On 1993 Kulmar left the band and was replaced for a short time by Nomos but, he too is shortly thrown out of the band for lack of dedication and effort. Therefore, the second demo "The Dawn of Aemizaez" was recorded as a three-piece. It was the first studio recording, as well. The demo includes songs such as; "Follow Those Who Died", which has since become a classic and a concert standard. After the demo, they received a vast amount of interviews in underground magazines around the world and Denial Of God gained a lot of reputation. "The Dawn of Aemizaez" is regarded on their label as one of the best demos, during that period.

On 1994 they renewed their lineup by adding new bassist; Fargel, in which they were back to an original four-piece lineup. This would further their recording of their first EP entitled "The Statues are Watching" for the Italian label Maggot.

During 1995 "The Statues are Watching" which justified a partial re-recording of their prior release; The Dawn of Aemizaez. It is limited one-thousand total copies - with few Danish copies. Only after a month or so, it became sold out from Maggot productions which was only a temporary label until the UK based label Dark Trinity Productions seems interested enough and hastily and plans to sign the band for the release of a mini-album and a full length album.

The recording of "The Ghouls of Dog" begins in 1996, early that summer and by June are finished. Before the release the band begins playing shows since their long awaited gap of 1992. After their local concerts they do a three-date, mini-tour through Holland and Belgium. These concerts see the band developing their imagery to their reputably well-known ghoul appearance, which is also shown on the front cover of The Ghouls of Dog.

Although, a lot of Dutch enjoyed their tour however, becoming more distinguishable in Black Metal, the band faces more controversies - particularly criticized for their artwork of a picture revealing a nude woman being bitten and bleeding. The Ghouls of Dog also often took into criticism for a picture of the band standing on a grave with human bones and skulls.

Denial Of God are, however, again not impressed by the reviewers opinion (on the contrary), knowing that this is all a part of their hideous horror themed Metal. The mini-album includes the darkest and most creepy material yet, among others the 8-minute epic The Crypt has Eyes. After an additional live show bassplayer Fargel is thrown out of the band for his lack of dedication and the band once again continues as a 3-piece. 1997: New songs are written, but early in the year Uksul decides to leave the band and leave Ustumallagam and Azter behind as the only original members. Right before his departure some new songs are recorded as demos. These recordings are the last to feature Uksul on drums and at the same time the first to feature some vocals by soon-to-be bassist Isaz. She joins a few months later and becomes the last member of the line-up which has meanwhile been joined by Sorgh on drums. These demo recordings are released two years later as the "The Cutse of the Witch" 7" EP. Once again the horror continues. 1998: Being dissatisfied with the ways of Dark Trinity Productions, Denial Of God leaves the label and signs with Hammerheart Records for the release of a new mini-album and a full length album. Due to the distance between the members rehearsals are few, but the band enters the studio at the end of the year to record the mini-album to be entitled Klabautermanden. 1999: In spring a 7 EP entitled The Curse of the Witch is released on Sombre Records to shorten the wait for the upcoming mini-album. This 7 EP contains the demo recordings from 1997 and is mainly meant as a collectors item and as a life sign to show the band is still in existence. Shortly after the band is once again incomplete as Sorgh decides to leave the band, but a new session drummer is found in R. Salskov.

Denial of God started performing a lot more live concerts after the previous demos/EPs and they included featured tracks such as Tyrant-God, which would eventually be promoted, for this. Another example of more live songs include their 1999 mini-album "Klabautermanden" which was played in Sweden, consecutively after being recorded.
Already at these concerts the band gains a notorious reputation, onstage including the band throwing living maggots at the concert audience.

Klabautermanden is released and the title track becomes the first and up till today only song with lyrics in their own language. At the same time the band decides to re-record two old songs along with some cover songs for the release on two 7 EPs. The band performs one live show this year which causes them to be banned from ever playing the place again due to the gory trail left behind from the raw meat mixed with blood and maggots. 2000: Again the band parts ways with their label. Not only did the label release the mini-album without the lyrics printed (something the band always did since the first demo, believing the lyrics are an important factor of the concept), but also fails to promote the band in a proper way and generally back out as the band is not commercial enough for them, relying too much on major distributions and reviewers. The The Crypt has Eyes 7 EP is released and the limited edition is again sold out fast. The 7 EP is backed with a haunting cover of Death SS classic Terror. The ghouls travel to Belgium to play a one-off show and another live show (the bands 10th) is played in Denmark and again the band has to face arguing over the bloody live show. While the venues despise the band, the reactions from the audience reaches from amazement to shock, but the ghouls leave their impression as always. The summer furthermore sees the release of The Ghouls of DOG with bonus tracks on cassette format on the Russian label Oupiric Productions and the name starts to spread in Eastern Europe and other countries where the cassette format is still the most common. The band continues to rehearse (although again on a rare basis as the band members still live far from each other). 2001: The Crypt has Eyes is re-released due to the high demand for it and is followed shortly after by the second 7 EP entitled Robbing the Grave of the Priest on Warlord Records. This one is backed with a haunting cover of Mayhems classic Funeral Fog. In May the band plays at the 2 heavy 4 you! festival in Sweden, presenting among old classics also some new songs from the forthcoming album, and once again leaves the stage all bloody. A new recording contract is signed with the Belgian label Painkiller Records, but unfortunately 2001 is also the last time the band will rehearse for a long time since first some equipment and later the rehersal room itself is lost. 2002: The whole line-up is spread all over the country and having no permanent rehearsal room it makes reasonable rehearsals impossible, so all that can be done is continuing writing new material for the upcoming album "The Horrors of Satan". 2003: The picture disc version of the "Robbing the Grave of the Priest" 7" EP is finally released by Apocalyptor Records after both Warlord Records and another label fail to release it. 2004: The songs for the long awaited "The Horrors of Satan" album are finally completed. Also material for more upcoming releases in the form of split EPs is written. The band signs an agreement with Painkiller Records for the re-release of the deleted mini-albums. The first rehearsal in 3 years takes place with Atziluth as a session drummer, and even if only a cover song is played at this sesssion (to be recorded in December for the upcoming W.A.S.P. tribute) the spirit is Denial Of God is still very much intact and 2005 should see the band making up for the time lost... 2005: Longtime bassist and ghoul Isaz leaves the band after losing interest in dedicating time to the band. The band records the W.A.S.P. classick "Hellion" for the upcoming W.A.S.P. tribute album "Shock Rock Hellions - A Tribute to W.A.S.P." as a 2-piece, using Atziluth as a session drummer. At the end of the year the bands is finally completed again with The Unknown on bass and Galheim on drums

The Horrors Of Satan

Robbing The Grave Of The Priest

The Curse Of The Witch

The Ghouls Of Dog

The Statues Are Watching

The Dawn Of Aemizaez (Demo)