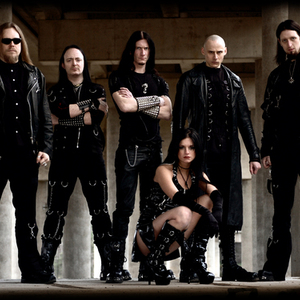 In the year 1994 melodic black metal band Siebenb?rgen was formed by Marcus Ehlin (guitar, vocals) and Anders Rosdahl (drums) in Stockholm, Sweden. A couple of months later, Fredrik Brockert (bass) joined the band. Following the release of their first and self-titled demo tape in 1996, Linus Ekstr?m joined the band on guitar.. During the Halloween weekend of 1996, Siebenb?rgen recorded their second demo, Ungentum Pharelis.

With this demo they landed a contract with Napalm Records, and recorded their first Album, in April '97, entitled Loreia.
In January/February 1998, Siebenb?rgen recorded their second album, Grimjaur, which was released in May of the same year.
Both demos and the two first full-length releases featured Lovisa Hallstedt's vocals and violin playing skills. But in 1999 a new female vocalist Kicki H?ijertz replaced Lovisa.
The following February, the band entered Six String Studio and recorded their third full-length release, Delictum. This album served as a fresh start for the band, which had been suffering major personal problems after the recording of Grimjaur.
Loreia and Grimjaur had made use of Swedish lyrics, but with Delictum, Siebenb?rgen broke out of their self-imposed mold by writing most of the lyrics appearing on Delictum in English. However, the themes remained the same. The lyrics continued to depict the creatures of old folklore, brought to life in the shape of dark poetic fairytales.
In the year 2000, Marcus Ehlin decided to relinquish his guitar playing to focus solely on his vocals. As a result, Richard Bryngelsson joined the line-up.
Soon thereafter, Siebenb?rgen began work on new material for their fourth album Plagued Be Thy Angel.
After the release of Plagued Be Thy Angel, Ekstr?m and H?jiertz left the band and was replaced by Fredrik Folkare and Turid Walderhaug. Turid was later replaced by Erika Roos in 2003. Niklas Sundin joined the band in late 2004 on bass, and Siebenb?rgen decided to fire Fredrik Folkare due to directional differences In 2005, Siebenb?rgen recorded their fifth album, Darker Designs & Images, with Marcus Ehlin on guitar once again.
Darker Designs & Images took Siebenb?rgen's music one step further. An excellent mix of classic heavy metal and brutal death metal, the album was recorded in Sundown Studios, Sweden.
During the years Siebenb?rgen has played over 100 shows, including 5 European tours and a Mexican tour. They have played together with bands such as Hollenthon, Graveworm, Agathodaimon, Tristania to mention just a few...

In February 2006 Siebenb?rgen decided to split up. But in late 2007 Siebenb?rgen resurrected, signing a deal with Massacre Records, with both old and new members, M. Ehlin handling the vocals and bass, R. Bryngelsson on guitar, D. Ekdahl bashing the drums and Johnny Gunther torturing the keys. Female vocals were now done by Lisa Bohwalli Simonsson.
The band released their last album Revelation VI in 2008 and finally split up in 2009.

Plagued Be Thy Angel