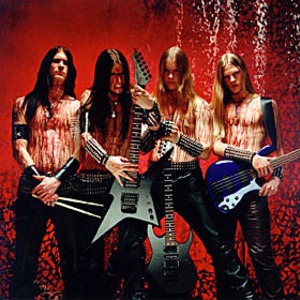 RAISE HELL (Stockholm, Sweden) was formed in 1996 by Jonas Nilsson(guitars) and Niklas Sj?str?m (bass) and after about one month Torstein Wickberg (guitar) joined. A couple of different drummers were tried out but no one of them cut the chase. When Dennis Ekdahl came to rehearse with the band they knew that they had found what they were looking for. The group started out under the name IN COLD BLOOD, and it was under that name the first demo, "Nailed", was recorded and led to a record deal with Nuclear Blast.

The group started out under the name IN COLD BLOOD, and it was under that name the first demo, "Nailed", was recorded and led to a record deal with Nuclear Blast.

In May 1998 RAISE HELL entered the "Abyss studio" and recorded their first album named "Holy Target". Just before the release the band changed their name to RAISE HELL. The release of "Holy Target" was followed by a European tour (with DISMEMBER, CHILDREN OF BODOM, NIGHT IN GALES and AGATHODAIMON) and also a gig at the massive metal festival Wacken Open Air (Aug of 1998).

In August 1999, RAISE HELL entered the studio again to record their second album "Not Dead Yet". This time the studio session took place at Studio Fredman with Anders Frid?n (IN FLAMES) as producer. After "Not Dead Yet" was released, the cult band DESTRUCTION heard the album and wanted RAISE HELL to support them for a mini tour. RAISE HELL gladly accepted, and after a cool mini tour with DESTRUCTION, Wacken Open Air stood at the door again (Aug 2000). The festival gig was a success for the band, and was then followed by a European tour (with DESTRUCTION, HYPOCRISY, CREMATORY and KATAKLYSM), and some club-gigs in Sweden.

The studio Flat Planet was booked in June 2002, and once again Anders Frid?n (IN FLAMES), now with support by Fredrik Reinerdahl, as producers. The album was called "Wicked Is My Game". The release was in October 2002. In late autumn of 2002, RAISE HELL decides to get a new singer, cause Jonas Nilsson wants to concentrate on his guitar playing. They decided to try an old friend of them, called Jimmy Fj?llendahl. He had been the singer of a local rock band called Driftaway. After just a few rehearsals, RAISE HELL could hear the capacity that Jimmy had and he almost immediately became a solid member of the band.

After three albums on NUCELAR BLAST the cooperation came to an end which was something that both parts were satisfied with. A search for a new label was started and after some more or less good offers RAISE HELL finally decided to sign with BLACK LODGE (Sweden). At this point Torstein realized that he no longer could put his full heart and soul into the band and therefore decided to leave RAISE HELL. There were never any hard feelings and still aren't. The member changes and label change came as a natural break for the band that resulted in that nothing was heard from the band in a couple of years except for a few live gigs.

In 2004 just after the signing with Black Lodge Records two demo songs were recorded and they turned out so good that they ended up on a 7? limited vinyl single. In the summer of 2005 the recording of a new album started. This time it took place at Tyroon Production with J?rgen Svensson as Producer. The album is titled "City of the Damned".

City Of The Damned

Wicked Is My Game