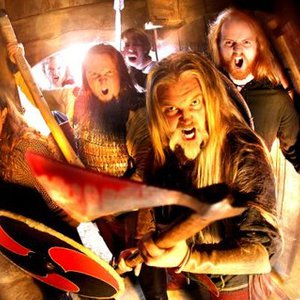 Since 2005, SVARTSOT has conveyed their distinctive blend of metal and folk music with a hint of the medieval age. Besides crushing guitars, bass and drums, the music is flavoured with the tones of authentic folk instruments such as whistles, mandolins and bagpipes adding the ruthless medieval feel, and melodies that only a lobotomy can remove from the head. Inspiration for SVARTSOT's lyrics is found in the wealth of Danish folklore and history, and the merciless growled vocals of Thor (yes that is his real name!) are therefore entirely delivered in Danish.

After the self-release of the demos ?Svundne Tider? (2005) and ?Tvende Ravne? (2006), SVARTSOT inked a deal with the renowned Austrian label NAPALM RECORDS in 2007. Hereafter followed the release of the albums ?Ravnenes Saga? (2007) and ?Mulmets Viser? (2010). The new album ?maledictus eris?, which was released in July/August 2011, tells the tale of the Black Death's devastating entrance into Danish history and is characterized by a marked musical maturing of the band.

SVARTSOT is an established name on stages in both Denmark and abroad. The band can thus look back on an extensive back catalogue of tours, shows and festivals (for example tours and shows with bands such as T?r, Alestorm, Negur? Bunget and festival appearances at Wacken Open Air, Paganfest, Metalfest Austria, amongst many others).