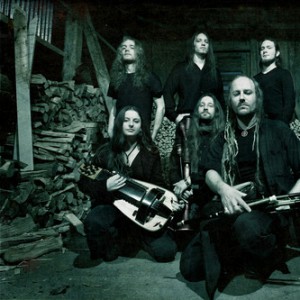 Eluveitie is a celtic folk metal band from Winterthur, Switzerland. The founder of this band was Chrigel Glanzmann. The band formed in 2002 and their first EP, "V&ecirc;n" came out in 2003. They describe themselves as "The new wave of folk metal". The band then released a full-length album, "Spirit" in June 2006. In November 2007, Eluveitie was signed by Nuclear Blast The first product of the collaboration, "Slania", was released in February 2008. The album peaked at number 35 in the Swiss charts and number 72 in the German charts.

Eluveitie use both traditional Swiss and Celtic instruments alongside electric guitars and drums. Their music is known to be inspired by Gothenburg's melodic death metal Scene and their lyrics are written in a mix of English and Gaulish. The name of the band comes from a graffito on a vessel from Mantua (ca. 300 BC). The inscription in Etruscan letters reads eluveitie, which has been interpreted as the Etruscan form of the Celtic (h)elvetios (?the Helvetian?), presumably referring to a man of Helvetian descent living in Mantua.

Origins (Mail Order Edition): The Call Of The Mountains CD2