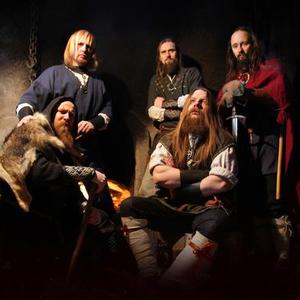 Skyforger is a folk metal band from R?ga, Latvia. They have been tempering their music in the smithy of the Thundergod since 1995. For the last decade, the band has been fighting under the flag of Latvian pagan metal; an extreme blend of traditional baltic folk music and various metal influences ranging from Norwegian inspired black metal through to 80s-rooted heavy metal. The band's unique combination of ancient and modern influence has given them a wide appeal throughout both the metal and folk scenes...

The first of these was unleashed from the forge in 1997. Titled Semigalls' Warchant, the demo-album told tales of the last free pagan tribes of the Baltic peoples; and their struggles with Christian invaders throughout the thirteenth century. The album's music is heavily inspired by the Scandinavian black metal of the early nineties. Harsh and cold, the extremity is balanced by traditional folk instruments, which anchor the venomous brutality firmly in the past; never loosing sight of the ancestral legends the music seeks to describe.

These tales of ancient tribal Latvia and its heathen tradition were to be expanded upon in Skyforger's first CD, 1998's Kauja Pie Saules ('The Battle of Saule'). Later in 2000 followed their third release, the First World War themed Latvian Riflemen.

At the end of 2002 Skyforger signed to German label Folter Records. Soon the world saw the release of their newest pagan metal masterpiece - P?rko?kalve was a fine return to their old themes of ancestral culture and heathen gods. The album successfully recaptures the spirit of ancient Latvia; this time eschewing specific historical tales in favour of describing the ancient Baltic traditions, myths and wisdom. The music is powerful, precise; perhaps slower overall than previous offerings, which gives each song an unhurried strength - imbued with pagan fire and crushing might.

Soon later band signed deal with Folter Records for releasing their Semigalls' Warchant demo tape on CD format, release date happened in April of 2005. Album features every track from the band's original demo (a rarity long since out of print), which has been completely re-mastered and combined with a brand new EP written especially for this release. This new material presents Skyforger's music after a decade of evolution - still burning with pagan fire and fierce loyalty to the band's Latvian homeland, but with a richer sound and an even stronger fusion of melodic folk music with their unique brand of extreme metal.

In between album recordings, Skyforger has been also busy on stage, playing as many concerts as they can. Behind the belt of band are already four European tours; many mini-tours and festival appearances and Skyforger is well known for their non-compromise live performances.

In the past few years, Skyforger also has worked on a conceptual album about the legendary Latvian fairytale hero, Kurbads, who was born magically from the white mare and did many great deeds. The album, similarly entitled 'Kurbads' was released via Metal Blade Records on April 23/26th 2010.