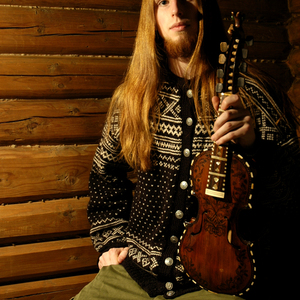 Myrkgrav is a one-man band from Norway. The only real member is Lars Jensen, and he plays most of the instruments himself (including guitars, drums, keys and bass). He also handles the unclean vocals himself. He writes all lyrics, music and arrangements for the band. He records most of his music in his own "Koia Studios". History: 2002: - The band was founded by Lars Jensen, as a more or less Black Metal oriented band. ...and a year passed. 2004: - The demo "Fra Fjellheimen Kaller..." was written and self-released in a few handnumbered copies.

2002:
- The band was founded by Lars Jensen, as a more or less Black Metal oriented band.
...and a year passed.

2004:
- The demo "Fra Fjellheimen Kaller..." was written and self-released in a few handnumbered copies.
Everything was still at an early stage, but somewhere along the road, Lars had incorporated some Viking Metal in the music.
-No guests on this demo. All music, lyrics, arrangements, instruments and vocals by Lars Jensen.

2005:
- The band started co-operating with DGF Records, and the decision to write a full-length album was made.
- The music evolved, and the Black Metal that before had dominated the band's sound now slowly started to fade away. It was by now clear that the band's sound started taking shape for real, and the best way to describe it would be something like "Folkloric Extreme Metal", though the new material does not negate the Black Metal roots the band has.
- Lars had always been interested in local history, and this was something he decided to incorporate in Myrkgrav, by using old stories and tales from where he had grown up as an inspirational basis for the lyrics.

Espen Hammer is the bass-player from Lumsk, and Sindre Nedland is the brother of Lars Are Nedland aka. Lazare from Solefald, Borknagar, Age of Silence, &Aacute;smegin etc.

2007 - present
Lars Jensen begins the long process writing material for the band's second album. Myrkgrav and DGF Records also parts ways in 2009 on account of unfortunate business events. By now the music has further evolved in direction of folk music (through incorporating i.e. Hardanger fiddle and passages found in traditional Norwegian folk songs), though extreme metal remains dominant in the band's core sound. Lars states that the upcoming album is likely to be the the last release Myrkgrav does, as his interest in extreme metal has mellowed considerably.

Politics (or rather lack thereof)
The following statement appears in the liner-notes for the "Trollskau, Skr?mt og K?labrenning" album: "Although Myrgrav's lyrics are based around quite national-romantic subjects, I don't give a rat's ass about party-politics, and therefore I would prefer that none of you think Myrgrav has a political approach to any musical efforts, at all."

The following note appears on Myrgrav's official Myspace biography: "Myrkgrav will NOT be related with any party-political ideologies, so keep your pieholes shut about that, will you."