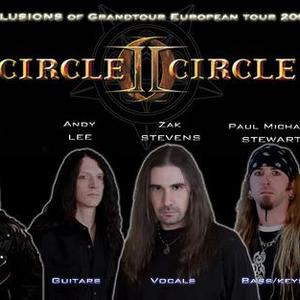 Circle II Circle is an American heavy metal band from Tampa, Florida. The band was formed by former Savatage lead vocalist, Zachary Stevens, in 2001. They play varied genres of metal including; heavy metal, power metal and progressive metal. For a period of eight years from 1992 until August 2000, Zachary Stevens was the mere infallible lead singer of power metal legends Savatage. His huge vocal range, controlled crafts and thrilling energy guaranteed splendid gigs night after night, every single show worthy of a live album.

For a period of eight years from 1992 until August 2000, Zachary Stevens was the mere infallible lead singer of power metal legends Savatage. His huge vocal range, controlled crafts and thrilling energy guaranteed splendid gigs night after night, every single show worthy of a live album. The young man from South Carolina accomplished something absolutely unique in five decades of rock history. Coming into play as a real rookie, he followed the charismatic and vocally incomparable Jon Oliva as Savatage?s lead singer without getting even a slight complaint from the longtime 'tage fans.

The polishing of the uncut diamond happened early during his childhood. His ambitions to play drums at an early age led to lead him to join a Kiss cover band when he was only nine years old. Filling both the drummer and lead vocalist roles, he was light years ahead of any auditioning singers. After recording four outstanding albums with Savatage, Zak left the band rather silently in the fall of 2000.

During winter time 2002/2003 the family man started his comeback, logically supported by his musical family Savatage. Songwriting genius Jon Oliva and guitarist Chris Caffery co-wrote with Zak the songs for the brilliant Circle II Circle debut "Watching in Silence". Zak acted as producer of his new band and realized his dreams by hammering away the drum tracks of a long play album for the very first time in his career.

The album earned glorious reviews all over the hardrock and heavy metal planet. It was among the top 3 positions worldwide in most magazine's annual reader polls as "Best Newcomer Act" and even entered the sales charts in several countries.

The production of the second second CIIC record, "The Middle Of Nowhere", features Zak?s talents even more intensively, taught to him by Jon Oliva and Paul O?Neill?s super-advanced master's school of power composition, production and improvisation.

The sacred atmosphere around the latest concept album from Circle II Circle "Burden Of Truth" has gained more weight than anticipated since its release last year. The conceptual album, inspired by the books "The Da Vinci Code" and "Holy Blood Holy Grail", takes on a life of it's own with Zak's powerful and highly expressive vocal-approach placing himself in the middle of the story as the main-character.

With a new management deal in place with Intromental, the band is ready to take on the future. Circle II Circle is currently working on it's 4th full-length release for AFM Records, to be released in early 2008.

The Middle Of Nowhere