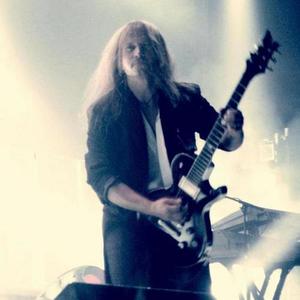 Chris Caffery is a heavy metal guitarist who is best known for his work as a member of Savatage and the Trans-Siberian Orchestra. Recently, Chris has been pursuing a solo career with the releases "Faces" and "W.A.R.P.E.D.". Chris is noted for his passion of New York sports teams. Chris began playing guitar at the age of 11, but some of his earliest memories include performing The Beatles song Help! for a show and tell in kindergarten.

His favourite bands growing up included The Beatles, KISS, Black Sabbath, Judas Priest and Rush among others. He has cited guitarists such as Ted Nugent, Rik Emmett, Ace Frehley, Randy Rhoads, Michael Schenker as influences through out the years as well.

After only 13 months, Chris grew bored with guitar lessons and decided to teach himself. He was part of a band called "Blitzkreig" in middle school and played a few shows, the first of which was at a bar in Ridgewood, New Jersey when Chris was only 13. At the age of 14, Chris and his brother formed a band called "Anti". While searching for a bass player, Chris found Darryl Sage, who remains one of his best friends and ended up co-owning Chris's house in Ridgewood. Anti eventually found a singer named Blaze, and whilst in High School, Chris opened for bands like Mountain, Overkill, Steppenwolf, Blackfoot and Metallica. Chris graduated from High School at the age of 16 and went straight into being a professional musician, teaching students during the day and playing shows in the night.

Anti did fairly well, but always had trouble with vocalists. Chris recorded his first demo tape at age 14 and his second at 17, which got him his first national gig. Chris was in New York City one night, hanging around in a club in the middle of Times Square, when he met the lead singer of a band called Heaven named Allan Fryar. They were looking for a guitarist and Chris asked if he could give Allan a tape. A week later and Fryar called, and it turned out that the band also needed a drummer, so Chris's brother Phil joined. The band was managed by David Krebs and a certain Paul O'Neill, who Chris would maintain close ties for most of his career.

Heaven were in-between leaving labels, and Chris did shows with them at the end of a tour and they recorded a new demo. Fryar sung on tapes of some Anti songs and it inspired the band to get the producers in the studio. Opening for Heaven were Skid Row (minus Sebastian Bach) on the East Coast (Chris turned down the opportunity to join the band) and on the West Coast, Warrant.

Paul O'Neill was later introduced to the Oliva brothers, Jon and Criss of Savatage by an Atlantic Records rep and O'Neill left Heaven to work with Savatage. Eventually, Paul invited Chris to New York, where they recorded the CD and introduced Chris to the band. Heaven did was not working with O'Neill and Krebs any more, but wanted a vocalist. Ironically, the band considered asking Sebastian Bach to join them, but they could not catch him in New York. But, Chris soon learned that a second guitarist may be needed in Savatage, so he learned all of the Savatage songs he could in time for Savatage's 1987-1988 tour with Dio and Megadeth. Savatage hired someone else, which left Chris very upset and he flew himself down to the audition. Chris was given the opportunity to perform, played 2 songs before the band stopped and hired him on the spot. The band went on tour, but Chris was kept on the side of the stage, hidden from the audience. Chris was only 20 years old and playing arenas and was happy, but miserable. He left Savatage after the arena tour.

Chris bounced between bands for a couple of years until he came into contact with the Oliva brothers once more. They asked Chris to join them just as the Gutter Ballet CD was finished. He gladly accepted, but the road took it's toll on all of the members and it was around this time that Jon Oliva began his drug and alcohol addiction. Under pressure from his brother to find a singer for their band, Chris quit Savatage at the end of the tour and formed Witchdoctor, with his brother Phil on drums, Hal Patino of King Diamond on bass, and TSO West member Doug Kistner on keyboards. The band played all over Europe, but the brothers were not clicking musicially and the band disbanded. Criss was contacted to perform on Savatage's Streets tour, but issues meant this did not happen. Chris soon learned that Jon Oliva had left Savatage. Chris called Jon, who invited him to Florida, and over "10 bottles of Jack Daniels", their project Doctor Butcher was born.

Zachary Stevens replaced Jon in Savatage, but Jon continued to work with his brother Criss on the record. Chris was again asked to re-join the band, but, he stayed loyal to Jon and Butcher. Some initial demos were recorded with Hal Patino and Gene Barnett for Butcher, but bad press over Jon's health lead Atlantic Records to make a decision - Doctor Butcher or Savatage? Atlantic chose Savatage. Chris was left disheartened. He went to work with friend Ray Gillen of Badlands fame, but he died shortly after the project began. Around this time, Criss Oliva was killed in a car accident. Chris was asked for the fourth time to join Savatage, but Atlantic Records suggested Alex Skolnick join the band instead. Chris would later work with Alex on the TSO East touring company. Butcher was signed in Europe and their debut was recorded in 1994. Jon Oliva left to do the Handful of Rain tour with Savatage so Butcher never toured. Chris, this time, inquired about joining Savatage on a more permanent basis with Jon Oliva, as a close friend and student of Criss Oliva he felt he could pay respect to Criss "spiritually" on stage. Jon agreed, and Chris was joined by Al Pitrelli, a good friend of his from New York. The two formed a steady partnership for almost 6 years, recording both 1995's Dead Winter Dead and 1998's The Wake of Magellan together.

During this time, Chris recorded with Joe Lynn Turner, TM Stevens, as well as produced and recorded for Metalium. Chris was featured on Tribute CD's for Guns N' Roses, Accept and Iron Maiden. The Maiden CD was with Jeff Plate and his long time and newly re acquainted best friend, John West. Savatage was stalled a bit in the recording of a follow up to The Wake of Magellan, due to the tremendous success of the then "Side Project", Trans Siberian Orchestra. Caffery considers himself the "ring leader" of TSO East when they tour, and he enjoys performing live with the ensemble.

Al Pitrelli left Savatage in 2000 when he accepted an invitation to replace Marty Friedman in Megadeth. Zak Stevens left shortly after, citing family reasons. Chris was left as the only guitarist in Savatage and Jon Oliva took up lead vocal duties for the first time in ten years. Chris played the lead parts with Jack Frost (who replaced him in Metalium) playing the rhythm parts on a short tour with Fates Warning and Judas Priest in support of 2001's Poets and Madmen. After Megadeth "disbanded" (it later reformed in 2004) in 2002, Al Pitrelli was invited to re-join the band since "he never left the family anyway".

Since the release of Savatage's most recent CD, Chris has appeared on records of Savatage alumni, including Zak Stevens's Circle II Circle and on Jon Oliva's Pain records. Chris himself released solo EPs and albums in 2004 and 2005, with a follow-up full-length album due for release in 2006.

Your Heaven Is Real