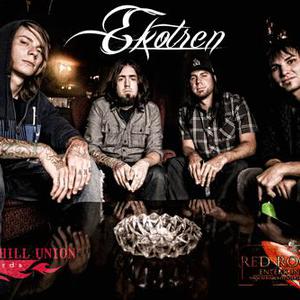 Ekotren, the metal/ hard rock band from Cape Coral Florida come back out swinging with their new album ?The Dead of Night?. The 10 song follow up to 2008?s ?Light The Fire? see the band leaner, meaner, and more focused then ever. Taking what they have learned and become over the last two and a half years of touring and hard work sharing stages all over the country with such heavy weights as Staind, Chevelle, Ill Ni?o, (hed) pe, Powerman 5000, Straight Line Stitch, and Diecast, the band buckled down with produced Paul Trust to craft an album far greater than its predecessor.

?The Dead of Night? sees the band tighter than its ever been, stepping up BPM's, sharpening its riffs and throat tearing screams, capturing the energy and intensity that Ekotren puts out in every blood and sweat soaked performance. With an album the band couldn't be more proud of, Ekotren will set out in 2011 to be heard, criss-crossing the country in support of their January 2011 release ?The Dead of Night?.

The Dead Of Night