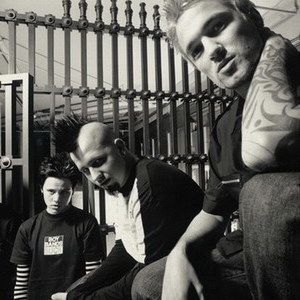 History.
1. Dry Cell's formation.
Part of the band formed in 1998 when guitarist Danny Hartwell and drummer Brandon Brown met at the Ratt Show on the Sunset Strip. They later met up with then-vocalist Judd Gruenbaum. The original name of the band was "Beyond Control".
After forming, the band caught the attention of Warner Brothers' Jeff Blue, an A&R Executive responsible for discovering Linkin Park. He later signed the band to a development deal, and found a new lead singer for the band in Jeff Gutt from Detroit.
In an interview with the website, The A&R Online, Blue described Dry Cell (at the time tentatively called "Impur") as: "they're like Metallica meets Incubus meets Linkin Park but heavier. No DJing, no rapping, very melodic and the kids are just phenomenal musicians".
Blue also goes on to tell how he discovered the band: "A friend of mine told me about the drummer who was 11 at the time and said how amazing he was. I ended up hearing a demo that wasn't very good but because I was right down the street from where they were playing I went up and saw them and was actually very impressed. I made a development deal and have now been working with them for over a year and a half. I'm with them six hours, six days a week. I have them in a rehearsal room right next to Warner Brothers".

2. The Disconnected album.
Signed to Warner Bros. Records, the band went to work recording their debut album titled Disconnected.
The 12-track album was due to be released on July 16, 2002. It was later pushed back to August 27, 2002. In the end, one of the band members father's got into a heated argument with Blue regarding the size of the band's promotion budget, the result of months of behind-the-scenes disagreement. Within 48 hours the father took his complaints to Warner, and two days later they released Dry Cell from their contract.
The only place Disconnected was ever sold at (albeit in limited quantities) was during the Locobazooka Festival in 2002. These were the final Warner pressed copies complete with artwork. On extremely rare occasions copies are sold on eBay. However, advanced copies of the album which come in a paper sleeve cover and contain different artwork, can be found more regularly.
The band always stated there was no chance of releasing the album, even if they were to sign a new record deal.
They shot a music video for their only single"Body Crumbles" from Disconnected. The song was included in the OST to the 2002 film Queen of the Damned, in the soundtrack for EA Sports Madden NFL 2003 and was featured on Rob Zombie's sampler disc Call All The Maniacs.
Dry Cell recorded a Stone Temple Pilots cover Heaven & Hot Rods which was featured on NASCAR: Crank It Up compilation.

3. After Warner Brothers.
After their departure from Warner Music, Dry Cell continued on. It was reported that a deal had signed with Epic Records in March 2003. For reasons unknown, nothing further eventuated.
In early 2004, Dave Wasierski was named as the band's new vocalist. At the time, it was reported that 8 new songs had been completed.
In 2005 vocalist Jeff Gutt re-joined the band, and they recorded four new demo tracks. The two songs released to the public were titled "New Revolution" and "The Lie". In late 2005, Danny Hartwell left the band. The group subsequently disbanded. After their split, two other tracks titled "Into Oblivion" and "Find A Way" were made available for download via their MySpace page.
During the split drummer Brandon Brown played in several bands including "Katsumoto", "Beneath the Vultures", "Live Like Were Dead", "AllurA" ,"Far From Flesh" and "Her and Her Friends" (which features Brandon on drums and vocals as well as Judd of Gruenbaum on vocals). Jeff Gutt formed Band With No Name and also sung in bands such as "Punch" and "Acrylic".
In February 2008, bassist Judd Gruenbaum noted on the bands MySpace that they have gotten back together for Guitarist Danny Hartwell's Birthday Party at The Roxy on Sunset strip. They were also recording new music according to Judd.
On December 15, 2009, Dry Cell announced through a comment left on their MySpace, that they released two full length records on iTunes, saying that one was of old songs (assumed to be Disconnected), and one was of new songs. But the songs were not found on iTunes for several days. A few days later, the Disconnected album (advance version) appeared on iTunes, with alternate cover art.
Later in January, the second album appeared on iTunes with the title "The Dry Cell Collection", which included mostly previously released material, such as "Find a Way", "Sick", "Velvet Elvis", "Grape Jelly" (retitled Living For Nothing) and several more. Four songs on the record ("The Lie [new version]", "I Deny", "Affliction", and "Tragedy") had been on the band's MySpace months before the release. So only one song off the album, entitled "So Alive", had never been released or heard before.
Both albums are currently available as Amazon MP3 downloads as well as iTunes. The albums are also available in audio CD format on Amazon.com.