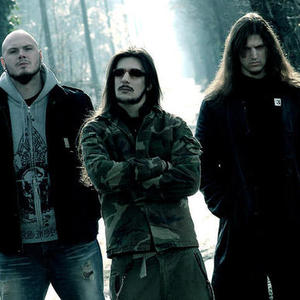 Talking about Disarmonia Mundi is like talking about an ever morphing fetus that despite being not born yet keeps changing throughout the time without achieving a complete form of any sort, eventually leaving the observer quite confused about the identity and the purpose of its strange and ever changing nature? Let's start from the easiest part: there have been style changes, there have been line-up changes...

Let's start from the easiest part: there have been style changes, there have been line-up changes, but the only thing that remained (and probably always will be) unchanged since the beginning of this band is the presence of Ettore Rigotti as a player, composer, sound-engineer and producer. We could easily say that Disarmonia Mundi is simply his own vision of extreme-melodic music and end the biography right here, but it would maybe be a little disappointing for you all, so we'll have to spend some more words about the past of this band and find a better way to introduce you to its bizarre world.


It all started around the year 2000 when Ettore with a bunch of friends/musicians composed and recorded into his own home-studio the first self-produced opus entitled Nebularium, a brilliant piece of progressive and atmospheric extreme music. Despite lacking a massive distribution and live activity (due to line-up problems) the record received an amazing feedback from both media and metal fans and allowed the band to sign a contract for the worldwide distribution of the next two albums.


While working on the new album the band almost lost all of its components (except Mirco, the bass player and of course Ettore) and joined forces with Claudio to complete the lyrics and vocal structures of the new songs and successfully got in contact with Speed from Soilwork to have him as a guest on the new record as well.


The year 2004 finally saw the release of the long anticipated second studio album entitled Fragments of D-Generation. No more progressive atmospheres, but a faster and more energetic musical vibe with a huge injection of melody and a more twisted and aggressive vocal/lyrical approach. Being a worldwide success the record helped the band to enlarge their fan base a lot despite the lack of live activity and granted them their own place in the crowded melodic extreme metal scene.


The year after Mirco eventually left the band to dedicate all his efforts to his movie director career, but new songs were already coming out Ettore's hat and the third record (Mind Tricks, 2006) showed that the renewed creative identity built by Ettore and Claudio was stronger than ever and far from being exhausted: a darker and heavier sound featuring multiple vocal layers by both Claudio and Ettore (with Speed collaborating again as a guest on some parts of the new songs) made this record their best release so far.


On December 9, 2009, the band released their new album title The Isolation Game. Guest members on the album included Bjorn Strid from Soilwork, as well as vocalist Antony H?m?l?inen and guitarist Olof M?rck of Nightrage. The album was released under the new Italian label Coroner Records. The album received often positive reviews, with some critics citing that "It doesn't do anything that we haven't heard before."

Before the release of The Isolation Game, the band released a remastered edition of their debut album, Nebularium, in a two disc set on June 26, 2009. The second disc included six tracks not originally making the cut for the album, the disc being titled The Restless Memoirs.