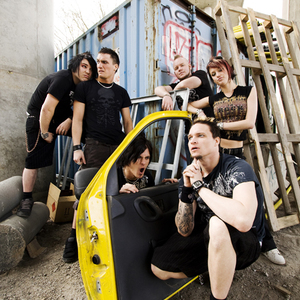 Sonic Syndicate is a five-piece band from Falkenberg, Sweden who have strong influences from Swedish bands such as In Flames and Soilwork. The band is now on hold. Originally formed in 2002 under the name Fallen Angels, by Richard, Roger and Robin Sjunnesson. They recorded three demos, Fall from Heaven, Black Lotus and Extinction. In 2005 they changed their name to Sonic Syndicate, signed with Pivotal Rockordings, and recorded their debut studio album, Eden Fire.

The band is now on hold.


Originally formed in 2002 under the name Fallen Angels, by Richard, Roger and Robin Sjunnesson. They recorded three demos, Fall from Heaven, Black Lotus and Extinction.

In 2005 they changed their name to Sonic Syndicate, signed with Pivotal Rockordings, and recorded their debut studio album, Eden Fire.

Following tours with Avatar, Himsa, and Amon Amarth, the band entered a contest held by Nuclear Blast Records along with nearly 1500 other entrants. Sonic Syndicate was one of the three winners and was offered a recording contract with Nuclear Blast. After working at Black Lounge Studios with producer Jonas Kjellgren (also guitarist for Scar Symmetry), Sonic Syndicate released Only Inhuman on May 18, 2007. A video for the single "Denied" soon followed, directed by Patric Ullaeus.

Due to their success under Nuclear Blast, vocalists Richard and Roland also managed to earn a song on the Nuclear Blast Allstar album titled Out of the Dark, accompanied by vocalists such as Anders Friden of In Flames, Bjorn Strid of Soilwork, and many others.

Sonic Syndicate played at the Wacken Open Air Festival 2007 and several other European festivals. In the winter of 2007, accompanied Amon Amarth as they toured th US. The band participated in the "Darkness over X-Mas Tour" with Caliban and Heaven Shall Burn, and toured extensively across Europe with Dark Tranquillity and Soilwork. In May 2008 they returned to America supporting Nightwish.

The band started the recording process of their third studio album Love And Other Disasters on March 16, 2008, which was released on Nuclear Blast on September 19, 2008. The first single, "Jack of Diamonds," is accompanied by a video again from Patric Ullaeus who later directed "My Escape" the second single from Love And Other Disasters. At the end of the year, the band toured Germany and Scandinavia and began work on videos for "Power Shift" and "Contradiction". The video for "Power Shift" was released on February 18 2008 on the band's MySpace and Official website.

March 30th 2009 Sonic Syndicate regrets to announce,
that Roland has decided to leave Sonic Syndicate due to personal reasons. He continues to sing along with the band in all confirmed shows, so there'd be time to find a good replacement.
More info at www.sonicsyndicate.com

August 24th 2009, the band announces in it's MySpace blog that "The Rebellion has begun" and the new clean-vocalist is a fact. Coming from Great Britain and an ex-vocalist of the band "The Hollow Earth Theory", Nathan James Biggs is welcomed into the Sonic family.

On September 2011, Roger Sjunnesson stated in a swedish interview that the band would be taking a break after the summer. Roger will concentrate on The Unguided, Nathan will be staying in Finland with his new girlfriend and has also begun reviewing music for Metal Hammer, John was recently married and will return home, Robin has moved to Stockholm and Karin will start studying.

We Rule The Night

Love And Other Disasters (Ltd. Ed.)