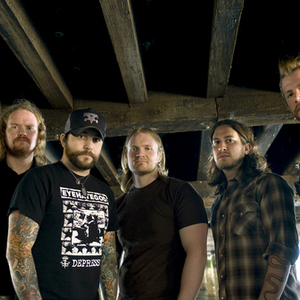 Himsa was an American metal band hailing from Seattle, Washington. The name Himsa is a spelling variation of the Sanskrit word for "no harm", literally changing the definition to "harm". The band formed in 1998 and released an independent EP and full-length album in 1999. Before being signed to Prosthetic Records, the band released one more EP in 2001. 2003 saw Himsa record and release their breakthrough album 'Courting Tragedy and Disaster.

2003 saw Himsa record and release their breakthrough album 'Courting Tragedy and Disaster.' Following the release of the album the band toured extensively throughout the US and Europe. They spent the latter half of 2005 in Denmark, recording their follow-up album, 'Hail Horror.' This album was released in early 2006 and displays a great deal of evolution in the bands' songwriting and skills. In comparison to 'Courting Tragedy and Disaster,' 'Hail Horror' comes off darker and heavier and features some more blistering guitar work from players Kirby Johnson and Sammi Curr (who returned to the band following a brief hiatus throughout 2004 and some of 2005). The album is also a step up production-wise.

In December 2006, Himsa signed a new record deal with Century Media records. They headed into the studio with producer Steve Carter, who produced 'Courting Tragedy and Disaster', and also brought Devin Townsend (vocal producer) and Tue Madsen (mixing/mastering) into the fold for their new album. The result was 2007's 'Summon in Thunder', a powerful, thrash-infused album with plenty of brutality and technicality. They will be touring in late fall/early winter 2007 with Amon Amarth, Decapitated, and Sonic Syndicate to promote the new album.


Himsa has advertised that their August 16, 2008 at El Corazon in Seattle will be their last show ever.

On June 20, 2008 bassist Derek Harn issued a statement via blabbermouth.net as follows:

"After 10+ years, four releases, countless tours and almost incomprehensible (yet constant) upheaval, the last three years of the band have been relatively stable. Having sacrificed everything we had in order to ensure the band's survival it's time to let it go. We made a great CD ('Summon in Thunder', Century Media); reportedly, our best. We've got a great label. We're getting along, we've toured and we're fine. It's all good. We're leaving it at that. A relatively unremarkable closing to HIMSA's gi-normously dramatic career, there appears to be no acrimony or unpleasantness, simply the end of a blistering, phenomenal, tumultuous era of the metal that HIMSA permeated into the modern musical landscape. References have been made to the band's evolving difficulties with the relentless touring schedules that have been the hallmark of HIMSA's career. "If we can't tour, and our reality is we can't tour as we have in the past, then it's not HIMSA. Better to hang it up than fade away.?

Vocalist John Pettibone said that he will devote all his time to side bands such as The Vows and has said he is done with touring.