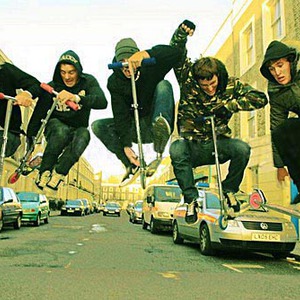 Parkway Drive is an Australian metalcore band. The band formed in the summer of 2003, their name coming from the street they used to practice on in their home town of Byron Bay, Australia. Not long after they had formed, they released a split EP with Adelaide band I Killed The Prom Queen. Later that year, the band also made an appearance on the Byron Bay Hardcore compilation What We've Built, preceded by their debut EP, Don't Close Your Eyes.

The band formed in the summer of 2003, their name coming from the street they used to practice on in their home town of Byron Bay, Australia. Not long after they had formed, they released a split EP with Adelaide band I Killed The Prom Queen. Later that year, the band also made an appearance on the Byron Bay Hardcore compilation What We've Built, preceded by their debut EP, Don't Close Your Eyes.

In May 2005 the PwD headed to the USA to record their debut album with renowned metal producer, Killswitch Engage guitarist Adam Dutkiewicz (who is responsible for acclaimed releases from the likes of Unearth, August Burns Red, Underoath and Johnny Truant.)

Since the release of Don't Close Your Eyes, Parkway Drive have rapidly accumulated a loyal fanbase Australia-wide, courtesy of support slots for international acts including Hatebreed, In Flames, Chimaira, Shadows Fall, As I Lay Dying, Bleeding Through, Alexisonfire, and performances at Metal for The Brain 2005 and Australia's Hardcore 2005. They have built quite a strong reputation within the music industry, this led to their signing with Epitaph record label.
In June 2006 they released Killing With a Smile in the United States during August of that year.

In late May 2006, second bass player Shaun Cash left the band for personal reasons with the full support of the rest of the members. The band soon found a replacement in their "merch guy" and long-time friend, Jia "Pie" O'Connor. Now a permanent part of the line-up, he played with them for the rest of their first international tour in the United Kingdom, and Europe, and later dates in the United States.

In October 2006, they were billed as the Australian contingent on the Rockstar Taste of Chaos tour, playing alongside Anti-Flag, Underoath, Thursday, Senses Fail, Taking Back Sunday and Saosin. During November and December 2006, they appeared at the Homebake Festival, Sound Fest, Resist Records' tour, Soundwave Festival and Gravity G Festival before returning to the UK and Europe.

On 3 March 2007, a new song was previewed to a crowd at Underworld entitled "The Siren's Song". The song would later feature on Horizons. They were placed on the bill for the U.S. Vans Warped Tour 2007 as the only Australian band on the tour. On 15 August, Winston McCall appeared in an interview on the short.fast.loud show on Australia's Triple J Radio station in which he previewed a track off Horizons entitled "Boneyards".

Horizons was released on 6 October 2007. The album was generally acclaimed by critics and fans alike; especially Blunt Magazine, who wrote that the album 'simply slays from the get go' and awarded it 10/10, and planet-loud.com, which suggested that it would 'set the benchmark for metal albums to come'. It debuted at number 6 on the ARIA Charts. After the release of Horizons, the band toured through the US, Australia and Europe with such bands such as Killswitch Engage, Bury Your Dead, Darkest Hour and others.

In February/March 2008, Parkway teamed up with Byron Bay bands/friends 50 lions and Word Up!, to complete the Surf Rats Tour of east coast Australia. This tour (travelling to towns not listed on the standard touring circuit) was based around surfing big surf spots on the way.

On 12 December 2008 while performing at UNSW Roundhouse, Parkway Drive announced that they were filming a DVD of the show, which would include footage of the performance and a few songs from other bands featured in the Sweat Fest Tour. On 18 January 2009, Parkway Drive announced their headlining US tour with Stick To Your Guns and MyChildren MyBride. On 28 January to 1 February 2009, Parkway Drive went on a tour in Japan with Shai Hulud and Crystal Lake. Parkway Drive played at the 2009 Bamboozle Lineup at the Giant's Stadium parking lots; as well as being confirmed at 2009's Download Festival.

In May 2009, Parkway Drive announced that they would be releasing a live DVD and an Australian tour was also announced with August Burns Red and Architects in support of it. It was on this tour that the band performed a new song entitled "Unrest."