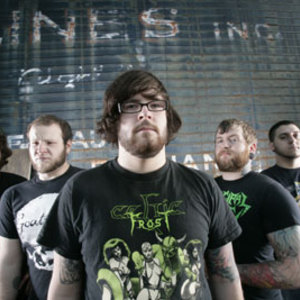 The Black Dahlia Murder gained their final band line-up in January 2001 and released their first demo entitled What a Horrible Night to Have a Curse, and a four-track EP, A Cold-Blooded Epitaph, the latter of which the group released on its own Lovelost Records. After appearing in concerts such as the Milwaukee Metal Fest, The Black Dahlia Murder signed to Metal Blade Records in 2003.

The band played in Ozzfest 2005 and also participated in the Sounds of the Underground tour in 2006, which encompasses both the United States and Canada. They also played at Wacken Open Air in 2007.

Current bassist Bart Williams left his former band, Detroit's Today I Wait, to tour with the Black Dahlia Murder. After touring with the band on their co-headlining gig with Throwdown and their European dates with Liar, he joined the group full-time, replacing former bassist David Lock. Frontman Trevor Strnad said that Lock was fired for incompetency. Williams was one of two engineers (the other being Walls of Jericho's Mike Hasty) on the band's first full-length album, Unhallowed.

The band's second album Miasma peaked at #118 on the Billboard 200. After touring for the Miasma record drummer Zach Gibson left the band leading to Pierre Langlois joining. Zach Gibson went on to join Abigail Williams. Recently, Pierre Langlois left the band for a more secure lifestyle, and the band has finished their search for a replacement drummer and found former All That Remains drummer, Shannon Lucas.

Their third album, entitled Nocturnal, was released on September 18, 2007. The album debuted at #72 on the Billboard 200.

The Black Dahlia Murder announced on their MySpace that they were going on a U.S. tour with Cannibal Corpse to promote their new album Nocturnal and celebrate the 25 years that Metal Blade Records has been in business. They were joined by label-mates The Red Chord, Aeon, The Absence, and Goatwhore.

In January/February 2008, the band embarked on a U.S. headlining tour with 3 Inches of Blood, Hate Eternal, and Decrepit Birth, followed by another alongside Brain Drill and Animosity. They were on Hot Topic's "Summer Slaughter Tour" with Kataklysm, Cryptopsy, Vader, Whitechapel, and Despised Icon.

Recently the band has announced that long time lead guitarist John K has left the band and has been replaced by Ryan Knight.

In May 2009, The Black Dahlia Murder released their first DVD, "Majesty". The DVD contains a documentary and live footage from the Summer Slaughter tour and their tour supporting Children of Bodom in late 2008. The DVD also contains all of their music videos and behind the scenes footage.[6]

On July 7, 2009, their song "What a Horrible Night to Have a Curse" was made available as downloadable content for Rock Band.

The band released its newest album "Ritual" on June 21st 2011, and headlined the 2011 summer slaughter tour with whitechapel and dying fetus.

Vlad, Son Of The Dragon (CDS)