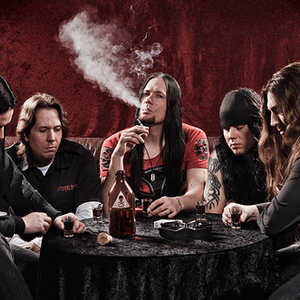 Poisonblack is the new band of ex Sentenced singer Ville Laihiala. It started out as a side project as Ville wanted to play guitar so he decided to create his own band and project. The debut album released in 2003 under the label "Century Media" was called "Escapexstacy" and the Cover & booklet art was released by Vesa Ranta (Sentenced's ex-drummer). This album followed more or less the themes and the musical direction of Sentenced.

The vocals were performed by Charon singer Juha-Pekka Lepp?luoto. After the debut album the band took a serious break cause of Sentenced's activity promoting their new album and various problems concerning the future of this band and later on the decision of Sentenced to split after their latest album The Funeral Album
After more than 3 years the band is now ready to give a new album to the fans. It's called "Lust Stained Despair" and the single is called "Rush" and includes 2 songs: "Rush" and "Poison I Crave". The second album (out August 28th, 2006) will not feature Juha-Pekka Lepp?luoto anymore, Ville decided to take the vocals duties along with the guitars. The new album will have a more rock and less melancholic touch.

In 2008 the released "A Dead Heavy Day" which hit the Finnish Album Shart in position 6. After this success they toured Europe with Dark Tranquillity and Fear My Thoughts.

Of Rust and Bones is the band's fourth studio album. It was released on March 22, 2010 in Europe by Century Media Records.

The Scandinavian release date for Poisonblack's latest album "Drive" has been set for April 27th, 2011.The album was recorded in Denmark with producer Tue Madsen (The Haunted, Sick Of It All)