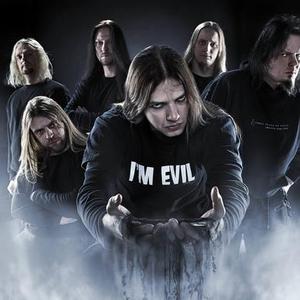 Eternal Tears of Sorrow (EToS) is a melodic death metal band, that incorporates symphonic metal music in their songs. They formed in Pudasj?rvi, Finland. The band was officially formed in 1994 by Jarmo Puolakanaho, Altti Vetel?inen and Olli-Pekka T?rr?, after some previous various metal projects (Andromeda, M.D.C, D.W.N) between 1991 and 1994, involving some or all of the three members. Andromeda had been put on hold in late 1992 because the rehearsal place had burned down.

The band was officially formed in 1994 by Jarmo Puolakanaho, Altti Vetel?inen and Olli-Pekka T?rr?, after some previous various metal projects (Andromeda, M.D.C, D.W.N) between 1991 and 1994, involving some or all of the three members.

Andromeda had been put on hold in late 1992 because the rehearsal place had burned down. It seemed their home town wasn't able to give them a new rehearsal place, so the three members decided to start up a new, drummerless sideproject (M.D.C.) and recorded a demo tape Beyond The Fantasy in autumn 1993. However, the songs on the demo were much better than they had expected, so they decided to go on with the project.

In spring 1994, they recorded a new demo, The Seven Goddesses of Frost. Because the town was still unable to provide Andromeda a new reharsal place, and the project had become a serious band, the band decided to change their name to more serious Eternal Tears of Sorrow. Between 1994 and 1996 the band was busy (in spite of all of the members doing their compulsory military services): they recorded their first studio demo tape (Bard's Burial), had a couple of songs on some compilation CDs in Europe and Canada and recorded their debut album, Sinner's Serenade. It took more than a year for the debut album to get released by X-Treme Records, a small underground label from Gothenburg in Sweden.

After recording the second album, Vilda M?nnu, Spinefarm Records approached the band and soon they signed a deal with the label. Outside Finland, the albums have been licenced by different labels such as Drakkar Records in German-speaking countries and Fono Records in Russia.

Their third album Chaotic Beauty (on which the band had three new members as Olli-Pekka T?rr? had left the band) might have been the most successful album so far as they went to an European tour with Nightwish and Sinergy promoting the album. However, it was their fourth album, A Virgin and a Whore, that went to the Finnish Album TOP 40 charts.

After releasing four albums, the band announced having a break just after the release of A Virgin and a Whore. In 2002 the band announced they were going to have a long break. However, they broke up in January 2003, the reasons being the members' interest in trying something completely different, or just taking a complete break from the music business.

In February 2005, the band announced they were to make a comeback. The album was being written and recorded during the year, and the fifth album Before the Bleeding Sun was released in April 2006 (excluding releases in Russia and Japan that were released later). This album also went to the Finnish Album Top 40 charts, this time with the position of #26.

Children Of The Dark Waters

Before The Bleeding Sun

A Virgin And A Whore