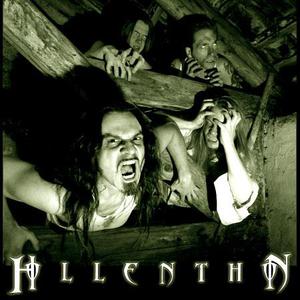 Hollenthon is an Austrian symphonic metal band formed in 1994 in Vienna by Martin Schirenc of death metal band Pungent Stench. Original bandname was Vuzem, changed to "Hollenthon" in 1999. Hollenthon's work is influenced by a variety of classical music, such as that of Richard Wagner. Vocals range from harsh to male operatic and even to female (performed by Martin's ex-wife Elena). Both of their albums ("Domus Mundi" (1999) and "With Vilest of Worms to Dwell" (2001)) have been highly regarded by fans and magazines alike.

Their third album "Opus Magnum" was released in May 2008, followed by the EP "Tyrants and Wraiths" in October 2009.
Present members of the band are:

With Vilest Of Worms To Dwell