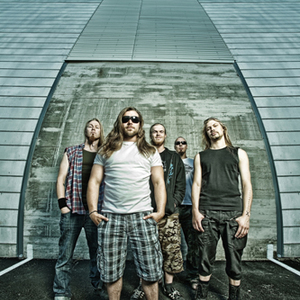 Stam1na released it's self-titled debut in the spring of 2005, but before that Stam1na was one of the most anticipated unsigned acts in Finland. The second album Uudet kymmenen k?sky? was released in May of 2006 and the third album Raja February 2008. Stam1nas 4th album, Viimeinen Atlantis, was released on February 10, 2010. Their 5th album, Nocebo, was released on 8th of February 2012. The first single release from the album was Valtiaan uudet vaateet which had much controversy video with some cruel violence.

Stam1na was signed up by Sakara Records in 2004, the label ran by Mokoma. Their collaboration started when Mokoma saw Stam1na on stage, and asked the youngsters to be the support act on their Finnish tour. Soon Stam1na became the first signing of Sakara, which had previously released only Mokoma's material.

Stam1na was formed in 1996, when the members were in their teens. Stam1na's core trio Antti Hyyrynen, Pekka Olkkonen and Teppo Velin has been the same from the start, and they've grown up playing together. Kai-Pekka Kangasm?ki joined the band in November of 2005 after being their session player the whole year. Emil L?hteenm?ki, who has been a band's session keyboardist on albums and shows since 2006, was literally proposed to be a band's permanent member in Jurassic Rock 2009. His answer was undoubtedly yes.

Stam1na comes from Lemi, a small rural town in the region of Southern Karelia, in eastern Finland. Lemi is one of those small places, where you don't have too many things to distract you from your hobbies if you happen to have one. Therefore Stam1na had nothing but time to rehearse endlessly, and develop their impeccable instrumental skills. Despite being small and rural, the municipality of Lemi has always been very friendly to aspiring musicians by for example offering them rehearsal rooms. Stam1na still rehearse there, and they never fail to remind everyone where it all started.

The debut album got nothing but great reviews. The records buyers also appreciated the album and it spent eight weeks on the Finnish album chart, and the single "Paha Arkkitehti" entered the charts at number four. The first single "Kadonneet kolme sanaa" was 5th. The new album Uudet kymmenen k?sky? was 3rd on the album chart first week.

Stam1na has been called "the future of Finnish metal" so many times that the expression is turning into a clich?, but luckily not into unfounded one. In a brief time they've become a household name in the Finnish rock/metal scene.

And why's there a "1" in their name? It's all about distinctiveness. Try to Google the words "stamina" and then "stam1na". See the difference?