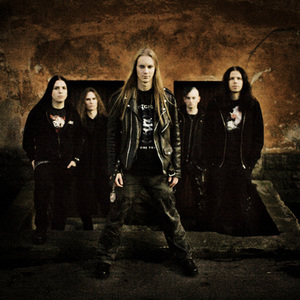 Norther was a metal band from Helsinki, Finland. The band began in early 1996 under the name of Requiem, and was assembled by guitarist Petri Lindroos and drummer Toni Hallio accompanied by two other musicians. In the beginning, the band suffered from the lack of a proper rehearsal place, but in late 1997, guitarist Alexander Kuoppala (ex-Children of Bodom) found a suitable place for them to practice at Lepakko; around this time the band decided to change their name from Requiem to Decayed. Their luck was short-lived, however, as their new rehearsal place was soon to be demolished.

The musicians who played with Lindroos and Hallio soon lost their motivation and quit Requiem.

After a few months, the band managed to find another rehearsal place, and began looking for members to complete their line-up. After quite a few auditions, they were unable to find musicians that they deemed fit to play with them, and thus went on a hiatus, which lasted until the beginning of 2000, when they met guitarist Kristian Ranta. The band became active once more, and with the help of two brothers who were friends of Lindroos - Sebastian and Joakim Ekroos - the band recorded their first demo, for the first time using the name Norther. A promising demo led to them signing a deal with Spinefarm Records.

Due to internal problems, the Ekroos brothers quit the band; this lead Norther into finding its first stable formation when bassist Jukka Koskinen and keyboardist Tuomas Planman were incorporated into the band.

In October of 2005, drummer Toni Hallio left the band, leaving guitarist/vocalist Lindroos as the only remaining original member. Hallio was replaced by Heikki Saari, drummer of Virtuocity.

Petri Lindroos left the band in 2009 because his other band Ensiferum took most of his time. Aleksi Sihvonen was hired as the new singer and Daniel Freyberg as the second guitarist. Norther entered Astia studios on October 5, 2010 to record a new album, ''Circle Regenerated'' which was released April 19 2011.

On 24th of July 2012 the band announced on their website that the members have decided to quit Norther because of time issues. The band played its last show on the 10th of August at Brutal Assault Festival 2012 in the Czech Republic.

Till Death Us Unites