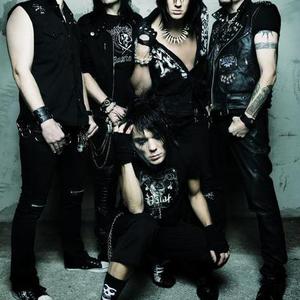 The 69 Eyes originate from Helsinki, Finland. They became a band in the early 1990's and are nowadays labelled as "gothic rock" though their early releases were more of a glam/hard rock style. 1989 - Formed by a group of friends in the bars of Helsinki, Finland in the summer of 1989, a nod to illustrate the band's tight-knit friendship is that the lineup has stayed the same since creation. The band originally played glam metal inspired music, different from their current gothic rock style.

Formed by a group of friends in the bars of Helsinki, Finland in the summer of 1989, a nod to illustrate the band's tight-knit friendship is that the lineup has stayed the same since creation. The band originally played glam metal inspired music, different from their current gothic rock style.

The band released their first 7 inch EP, "Sugarman", in 1990, followed by another 7 inch, "Barbarella" in 1991. These releases paved the way for the bands first album Bump 'n' Grind released in 1992 which contained some re-recorded versions of songs from the first 2 EP. This same year, the band released their final 2 7 inch EP's, titaled "Juicy Lucy" and "High Times Low Lives". In 1994 through a Japanese Label the band's second CD release was unleased, the compilation album "Motor City Resurrection". It has since been re-released with 8 bonus tracks worldwide. Though this release featured no new songs, it collected the majority of the bands early material and contributions to other compilations. It was followed in 1995 by Savage Garden which featured Hanoi Rocks guitarist Andy McCoy on the track "Wild Talk". Also released during this time were 2 VHS tapes "Motor City Resurrection" and "Savage Tales" available only through the band's self-run fanclub which are seen rarely, if ever for sale online. In 1997, Wrap Your Troubles in Dreams, which fans generally mark as the last "glam" album before the milestone success of 1999's goth rock infused, Wasting the Dawn which was released internationally on Roadrunner Records and marked the band's major label debut. The album's hit single, the title track Wasting the Dawn lyrically paid tribute to The Doors' Jim Morrison and was released as a digipack CD, which is now a rare find for fans of the band. Jyrki 69 developed a concept video for this track which featured long-time friend and collaborator HIM member Ville Valo posing at a snowy cemetery as the ghost of Jim Morrison. This video was released on VHS in Finland featuring a behind the scenes feature, both the video and feature were later added as extras on the Helsinki Vampires DVD.

Spring of 2000 brought the single Gothic Girl which spent months on the Singles Top 10 and on Finnish nation radio playlists. It brought the band their first gold record. After recording their sixth studio album, Blessed Be, the band did their first short tour for Wasting the Dawn in Germany which included a show at the M'era Luna Festival. Support for the tour was Norwegian rock band Zeromancer.

Released in September 2000, Blessed Be rose straight to number 4 on the Finnish Album Charts and stayed in the top 10 for over a month. The second single was Brandon Lee, the third was The Chair and Stolen Season was the fourth. Videos were filmed for the first 3 singles.

In 2002 the band released Paris Kills, which would be known as their breakthrough album. It stayed for weeks as number 1 in Finland and went gold in a month, June 2002. In Germany it rose to number 35 in the first week. After touring Europe and Finland for months, a sold-out show at Helsinki's famous Tavastia Club was filmed and documented in November for use in the "Helsinki Vampires" DVD.

At the end of 2003, The 69 Eyes were signed to EMI Finland, as they geared up to record their highly successful Devils album. The well-timed "Lost Boys" single was released in Finland at this time, paying homage to the film of the same name as anticipation for the full length album grew.

2004 saw the release of Devils, their 8th album, to which they toured the UK in support of Wednesday 13. Once again the album was number one in their native Finland and reached gold in a month. It was their first release on a big major label Virgin/EMI. Released in their native Finland in October 2004 later on in Europe through Virgin/EMI and in October 2005 in USA through 456 Entertainment it is also their 4th album to reach gold status and again another number one position on the Finnish TOP 40 album charts.

In 2005 The 69 Eyes played nearly one hundred shows around the world in fifteen countries, from Mexico to Japan. Devils was also released in the USA. The band filmed their video for their biggest ever hit single "Lost Boys" in Hollywood and the Philadelphia area, directed by the band's friend and MTV superstar Bam Margera.

In 2006, The 69 Eyes toured for the first time in the USA in March with Program The Dead & Damone, appearing on Last Call with Carson Daly. Their new album Angels, the sequel to their 2004 album Devils, was released in March 2007. Shortly after their Early 2007 tour with Cradle of Filth & 3 Inches Of Blood. Their latest album Angels was released on the 25th of June 2007 in the UK. The first single from the album is "Perfect skin" which went straight to number 1 on the Finnish singles chart. The second single is "Never Say Die". Angels debuted at number 1 in Finland and has since gone gold.

The band did a summer 2007 US tour with Wednesday 13, Night Kills The Day, & Fair To Midland, and supported Within Temptation on tour in the UK in November. They played 125 shows world wide in 2007.

In 2008 they released their first live album titled The 69 Eyes: Hollywood Kills. The album was recorded at the Whisky a Go Go in West Hollywood in March of 2006.

The band began 2009 by touring in Europe as a part of Hellhounds Fest with Tiamat and Ava Inferi. The band started recording their tenth studio album with Grammy award winning producer Matt Hyde. He is most known from his works with Slayer, Monster Magnet and Fu Manchu. The recording process took place both in Helsinki and Los Angeles. The new album has been titled Back in Blood was released on the 28th of August in Europe and will be released the 15th of September in the USA. In early June, Bam Margera directed the music video for the first single from the album, "Dead Girls Are Easy." The video premiered on playboy.com on 17 of July 2009. The 69 Eyes also toured Australia for the first time in mid June, playing in Brisbane, Melbourne, and Sydney.

Hollywood Kills: Live At The Whiskey A Go Go