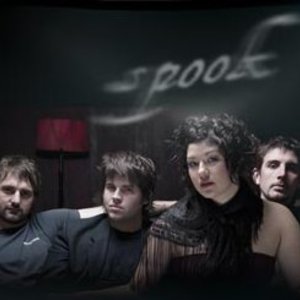 The are, at least, three bands known as Spook. 1) A band, from Australia, featuring Chanel Cole, Daniel Belle and electronic producers Statler and Waldorf. Spook's beautiful debut album is "The Dusk Sessions". It was formed when Statler & Waldorf approached Sydney based musicians Chanel and Dan to feature as guest vocalists on their new downtempo project. Meeting in Brisbane, everything changed when a studio session on the first night went horribly right.

1) A band, from Australia, featuring Chanel Cole, Daniel Belle and electronic producers Statler and Waldorf. Spook's beautiful debut album is "The Dusk Sessions". It was formed when Statler & Waldorf approached Sydney based musicians Chanel and Dan to feature as guest vocalists on their new downtempo project. Meeting in Brisbane, everything changed when a studio session on the first night went horribly right. Starting as just a jam on some existing track ideas, a style and feel nobody had anticipated evolved as the session continued into the early hours of the morning. The next day the original plans and tracks were abandoned and the decision made to follow the new ideas to whatever their destination may be.

Six months later, the result is known as Spook, a band with an identity and style unmistakably their own. Reminiscent of early 90's Trip Hop with elements of everything from jazz, blues and folk to electro and classical, Gascoigne's leftfield compositions and production mesh perfectly with Cole's intricate melodies and delicate lyrics while Belle's impeccable vocal harmonies and string arrangements add a rich lushness to offset Hede's sharp electro beats. Think Portishead or Massive Attack and you get a hint of what is on offer.

?The Dusk Sessions' is an album that draws you in without having to demand attention. It is accessible yet emotionally sophisticated, Popular as opposed to Pop. "5 o'clock on a Sunday afternoon on the balcony having drinks with friends?. A before-and-after a big night out chill.

Written, produced, recorded entirely at the Statler and Waldorf studio in Brisbane 'The Dusk Sessions' is the antithesis of the formulaic Idol album, instead being a testimony to musical inventiveness and a healthy do-it-yourself attitude. Relying on strong songwriting rather than a conveyor-belt approach to music 'The Dusk Sessions' represents a refreshing change in direction for Australian music.

2) An interesting combination that comes together, for this one slice of Sheffield, UK sound sleeze, from 1999. Spook was, in short, a partnership of The All Seeing I & Moloko, with members: Richard Barratt & Dean Honer + R&oacute;is&iacute;n Murphy (vocals) & Mark Brydon. This cocktail come together to present their contorted versions of Grace Jones' nightclub classic Feel Up.

The original is a dark bass bin blaster weaved together by an infamous "atmosfear" sample, with roisin wailing on fine form. This on a definite early morning riser to bring the dancefloor to life as it did busted out from danny tenaglia at the twisted party in miami at the recent winter music conference.

The remix comes from a few miles down the m1 which is courtesy of manchesters very own salt city orchestra. They take the track in another direction on a more laidback groove.

Polishing the tougher elements and pushing the track into a deeper mode along with tweaking the finer elements , one for the connoisseurs.

3) Spook's first love and first musical interest started with his four painted friends from the band KISS. Though his musical roots lay in the 1980's he learned to appriciate/love lots off other music like: Free, Kevn Kinney, Bruce Springsteen and his favorite rockband Tesla. It means that Spook can go from Heavy Rock to Singer-Songwriter which is actualy his way to write and to perform. All members of the band have different musical interests and that makes this band sounds unique! .. .. .. .. .. ..


At the end of 2001 SPOOK released his first solo album called Colors. Songs written by himself and some (co-)writers who stands near by him. Heavy rocksongs like "Waitin'for the night" but also pop, blues and passioned ballads rumble in unstopable emotions through your speakers. During the recordings Spook surrounded himself with sounding names of the Dutch musicscene. Spook's songs are basicly a reflection of his heart and emotions, or based on a true story. The last 7 years Spook is surrounded by five also musical talents and madder their diverse musical interests the six gentleman created a very fine sound and are a real band. These guy's diserve lots of credits of what Spook is and how he and his band performes. It took a long time to record some new material and the new single of "The City" is Spook's newborn child and there is more to come. "The City" is recorded at short notice and this new single comes with a brand new video and is allready shown at myspace and you tube, there's live material on the shelf and Spook regained new energy and there are new songs to come. Spook played together in the last years with: Ian Parker, Laberinto, 16 Down, and Beef and played at several big festivals and in venue's that matters. Belgium, Scotland and Germany are the countries Spook is aiming at and all the fine venues in Holland. Either electric or acoustic, Spook wil grab you! The last months Spook hit the stage and it was magic again. New pictures are added to the slide shows and it shows a little bit of the energy that comes to you when you visit one of there shows. So be there the next time. Keep yourself informed!!! .... .. .. .. .. .. .. .. .. .......... ..Get Your Own!.. |