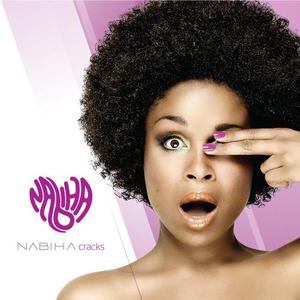 Nabiha Bensouda is a born artist and performer having been blessed with Danish and North-West African roots (Gambia, Mali and Morocco) which play a huge role in the music she loves to make. Having been exposed to all genres of music Nabiha has developed her own unique style, which is strengthened by her sublime and distinctive vocals. She possesses an energy and attitude that bewitches the listener of her music in a brilliant and magical way.

Her debut album: ?Cracks' co-written by herself, Carl Ryden, Nina Woodford, Cozi Costi and Terri Walker and produced by Carl Ryden, was released in Denmark spring 2010 with big success. It entered the official Danish Top-40 Album Chart at # 17 and on the TDC PLAY download album Top-40 ?Cracks? peaked at # 2. The album also peaked at #6 on the itunes album chart. The album has received fantastic reviews with 5-stars in several music magazines such as Gaffa, Tjeck, Sirene, Olivia and received 4 stars in various other well known magazines across Denmark. The first single; ?Deep Sleep? peaked at # 6 on the overall Danish airplay chart and on the official sales chart the track reached # 4. The single has now gone Gold in Denmark with amazing statistics behind it, ?Deep Sleep? peaked at number 1 on the TDC Play digital downloads, as well as # 3 on the itunes singles chart, # 6 on the Music control airplay and # 2 on the Digital Sales Chart by Nielsen. The second single; ? The Enemy' peaked at # 5 on the official Danish Airplay Chart and are about to go gold too. The three songs from the album; ?Deep Sleep?, ?The Enemy? and ?You? have all been ?Song of The Day? on the British music site Popjustice.com. Also Nabiha was picked as ?Artist to watch' by concrete loop in US.

Nabiha's live performances are an extremely important and expressive part of who she is and her presence is very much in demand. In 2010 alone she supported James Morrison on his Danish Tour at Falconer Theatre in Copenhagen as well as Jason Derulo, Jamie Cullum (German tours) and Rasmus Seebach (Danish 5x Platinum seeling artist) on their SOLD OUT tours.

Nabiha have been off to a flying start and there is plenty more to come from this rising star in 2011, with her album's forthcoming international release having started the new year with her own sold out tour in Denmark and with yet another nomination as 'Urban release of the year' @ Danish Deejay Awards for "The Enemy"...