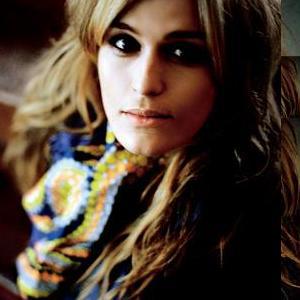 Danish singer/songwriter whose debut long-player Ducks & Drakes was awarded the Danish Grammy (now Danish Music Award) for Best Album and was named Best Female Artist and Best Songwriter. Her three subsequent albums Almost Gracefully, The Wedding Of All Things, and Figures Of Eight have all acheived great commercial success and critical acclaim (including Danish Music Award nominations as Best Female Artist) in her homeland.

Born & raised in a remote northern fishing village, by the age of 18, Laubek had packed up her guitar and left home - moving south to the Danish metropolis of Copenhagen. Soon after her arrival, Laubek was discovered by the legendary Danish record producer Poul Bruun. When offered a deal with EMI, Laubek declined so she could "spend some time and find my voice." She soon settled into life in Copenhagen - studying at The Rhythmic Music Conservatory, touring as a backing vocalist for Sanne Salomonsen, and playing in a few cover bands. A year later when Poul Bruun came ringing again, Laubek pulled out her guitar, played one of her originals "Fairytales" and was signed on the spot.

Encouraged by Bruun to avoid the producer-driven pop saturating European radio at the time, Laubek continued her studies at the conservatory (a five year program) and appeared in the (fully clothed) Nansen Theatre production of Hair while at the same time writing and recording her debut album Ducks & Drakes. The stunningly heartfelt ten-song collection proved to be the musical antidote that audiences were searching for...

Laubek has continued to build upon both her commercial and critical reputation. Her three follow-up albums Almost Gracefully, The Wedding Of All Things, and Figures Of Eight have all resided at, or near, the top of the Danish album charts and at the same time have garnered praise for their unique artistry and vision.