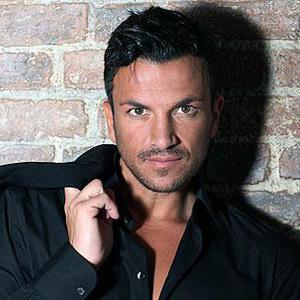 Peter Andr? is a UK-born, Australian-raised pop singer of Greek-Cypriot descent who had numerous hits in the mid to late 90s. He later achieved a great deal of notoriety through reality-TV appearances and his highly publicized marriage with model Katie Price. However, after the couple split in 2009, he re-emerged with a successful album, "Revelation," which reached No. 3 in the UK charts and earned him some credibility.

In 1992, Andr?'s singles "Drive Me Crazy" and "Gimme Little Sign" were released. In 1993, a self-titled album charted well in Australia and the hit singles "Funky Junky," "Let's Get It On," "Do You Wanna Dance" and "To the Top" all hit the Australian Top 50 charts. In 1993, "Gimme a Little Sign" picked up an ARIA Award as the highest selling single of the year.

His success dried up somewhat when Andr? attempted to make the transformation between teen-pop heartthrob and mature R&B singer with mixed results.

In 1998 he released a UK Top 10 version of "Kiss The Girl" from Disney's "The Little Mermaid" before being dropped from his record label and disappearing from the public eye. This was until his "I'm A Celebrity" appearance in 2004, which led to his third No. 1 and spawned the No. 3 UK hit "Insania." He reportedly wrote the song while filming the reality show, which featured Price. The public witnessed the relationship grow between the two, which turned them into tabloid staples.

News broke on 11 May 2009 that Andr? and Price had separated after three and a half years of marriage. Andr? said on the British TV show "This Morning" that there is little chance the couple will reconcile.

The Long Road Back

All About Us (MCD)