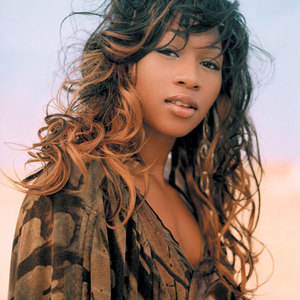 Terri Walker's list of credits reads like that of a music business veteran. After high school she attended the Italia Conti Academy of Theatre arts where she soon learned that singing was her first love. A short time working as a backing singer lead to high-profile appearances with Shanks And Bigfoot, Young Disciples and Brand New Heavies. Performances on the club circuit with Paul Weller's inner circle of post-Style Council soul beatniks followed, but a clear understanding of who she was, and where her career was going, still eluded her ?

?I was working with everybody, and I'd had a lot of attention, and people knew I could sing, but nobody really knew what I was about,? Terri says. ?I didn't even know. I just knew that I could sing and that was what I wanted to do. I loved Whitney Houston, I loved The Eagles, I loved MC Hammer ? there was such a wide range of people and influences in my head, I just knew I wanted to do something.?

So without telling anybody, she left for LA, initially just for one week. ?I told nobody except my Mum. I told her that it was something I needed to do, and she said ?You go, girl!'.? Terri had the ?phone number of somebody she had worked with in the UK, who was based in LA, and she called him when she got there. Her contact introduced her to a few people in the business and things started to pick up. ?Hinda Hicks was over there at the same time working on her new album, so we hung out a bit.? A week turned into a month, which Terri spent writing and recording with a number of people around the city. ?My voice changed while I was over there, and I started writing songs about the way I felt about things. I just thought, ?This is more me'.?


She returned to the UK with a handful of demos, which soon had record companies knocking at her door. She signed with Def Jam UK/Mercury, and the resulting 2003 debut album ?Untitled' won her Four Mobo nominations and a shortlisting for a Mercury Prize. The follow-up album ?L.O.V.E.' simply served to broaden her fanbase, at which point ? in true Terri Walker style ? she decided, once again, that she needed a change.

Terri says that ?I Am' brings together the best of the first two albums, and a lot that's new ? the fundamental difference being that this album is all Terri Walker.

?I had to think for a while about what I wanted to do next, and it was then I decided that I had to make an album exactly the way I wanted it to be made. I wanted to be judged on my own writing and my own performance, so I set about contacting anyone I had enjoyed writing and playing with up until that point, and recorded the whole album pretty much as live. It was great fun.?

Terri went back to LA to mix the album with Gerry Brown, whose list of musical credits reads like a Who's Who of rock and soul. ?It's amazing working with a guy like that who just drops names like Steely Dan, Earth Wind & Fire and Stevie Wonder into a conversation,? she says. ?And Gerry and Dekkor, they just let me do my thing ? everybody just let me do what I felt was right for me, and the result is an album that I love.?

Terri Walker's influences are wide and vast and are reflected everywhere, in her performances and in her writing. Her mother's record collection ? a catholic mix ranging from Aretha Franklin to Steely Dan and from Millie Jackson to Manfred Krug ? formed her earliest influences, and one particular recording, ?Move Closer? by the late Phyllis Nelson, was the one Terri remembers that made her decide: ?This is what I want to do?. Hearing Whitney Houston a little later removed any remaining doubts, and singing has dominated Terri's life ever since.

Her mother moved to Germany when Terri was four years old but she came back to the UK to be educated at St. Michaels, a boarding school in Sussex. There her musical training was largely classical, but she broke free of any such constraints after Italia Conte. Since that time, she has worked with an eclectic group of musicians that includes Mos Def, Lisa Stansfield, Rafael Saadiq and Ben Watt. Lead vocals on a Jools Holland album track, ?Misfit', led to a Royal Albert Hall performance with Jools and his big band, in a line up that also included the likes of Sir Tom Jones and Ronnie Wood.

It reads like a lifetime in music, but for Terri Walker it has only just started.

With the release of ?I Am' you will be seeing much more of Terri, as she intends to take these songs out of the studio and on to the live stage. ?I want to do as many performances as possible. I want people to see me live, and I want to sing live. I'm really looking forward to it. That's the next thing for me.?