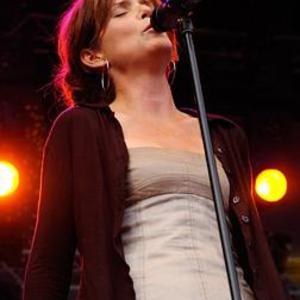 Rebecka T?rnqvist (born 26 April 1964 in Uppsala, Sweden) is a Swedish jazz and pop vocalist. Her debut album 'A Night Like This' came in 1993 and sold over 100.000 copies. She was nominated for five Swedish Grammies in 1993. This was followed by 'Good Thing' in 1995 which got a platinum record and got her a Swedish Grammy Best Female Pop/Rock Artist of the Year in 1996. She is also a member of the group Gloria which released the albums "Gloria" and "People Like You and Me".

Most of the albums by Rebecka T?rnqvist is sung in English with the exception of Vad Jag Vill (2001). She also appears on the Swedish compilation Jul i folkton (BAM, 2005) in the song Det ?r En Ros Utsprungen (III). She also appears on another Swedish compilation 'Dubbel Trubbel' (EMI, 2005) with Resan Hem (together with Eldkvarn) and Vad T?nker Han P?.
Rebecka T?rnqvist grew up in Africa where her father worked for the Swedish foreign aid organisation Sida.
In 1996 she was awarded Ulla Billquist Stipendiet (Swedish).

The Cherry Blossom And The Skyline Rising From The Street