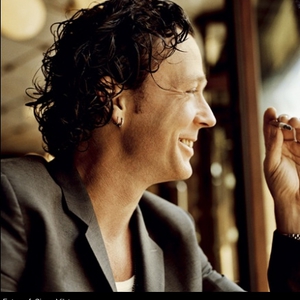 Thomas Helmig, a Danish singer and performer, grew up with his four siblings in a medical home in the Aarhus suburb Eg?. The musical career began in the context of parental divorce. Divorce unease and insecurity for the little Thomas and he looked calm at the piano. Already at the age of 6 years, he was thereforeautodidact pianist. As early as fourth grade, Helmig formed his first band, Heavy Oil, together with some friends. His great model was Gasolin. As 13-year-old restrained him, in addition to piano, guitar and percussion.

The musical career began in the context of parental divorce. Divorce unease and insecurity for the little Thomas and he looked calm at the piano. Already at the age of 6 years, he was thereforeautodidact pianist. As early as fourth grade, Helmig formed his first band, Heavy Oil, together with some friends. His great model was Gasolin. As 13-year-old restrained him, in addition to piano, guitar and percussion.

After being finished 9th class from S?lyst School Eg? he started in high school. But he decided to leave school early as 1.G to devote himself to music. The resolution had the parents fully understand. He went instead to the U.S. asexchange student ahigh schoolWhere he discoveredMotownmusic and got together with somesoulmusicians inDetroit. When he came home he participated in "Kaksi Kuggas Band"In 1981 Who played around in Aarhus, Denmark.

The Aarhus musikmilj? was at that time, first in1980s, Centered on music sites Motown and Vestergade 58 Here came Helmig, and here he learned the musicians infunk-band "Elevator Boys"To know, and and1983 He was lead singer of the band. They toured the country around in the next two years with great success. Helmig made her debut as soloist in supporting single "Africa" in 1985. It was here that the recordResonate (which were owned by Gnags) Discovered him. Shortly after udkom debut disc, which merely statedThomas. It was a great success. Especially ballads "Put You Here Beside Me" and "Far Out" got the Danes to block your ears up. The 19-year-old singer was praised for his indf?lte and warm expressions. Already next year,1986Came the successor, "2" as recorded by Thomas Helmig Band, as Thomas had formed with people who previously were members of the Lift Boys - including drummer Claes Anthonsen and guitarist Palle Torp.

In1987 appeared more rockede album "Dear Machine" and the media began to criticize him for everything from hair to text universe. Plate "Way Away" was released in1988, This time without a name "... Brothers." Album overwhelmingly bitter songs were inspired by Helmig recent divorce from Seas Fenger. Among other things, the album contains monster hitsNow that you've burned me by andI am in charge here and knocking on. The former was criticized heavily, but it is nevertheless Helmig most popular song to date.Way Away sold 160,000 copies. Helmig participated that year in the Christmas song "When the snow falls," sung in Duet with Seas Fenger, and the single "The I love, love me" which was indsunget in honor ofAIDS Foundation. It would later prove to be another classic.

In1988 were at aGr?n Koncert tomatoes thrown on stage after Helmig, which the media was described as "assault" and "violence". Helmig themselves, however just it was a couple of people who are bored.

In1990 udkomLion HeartThat was doomed to be a failure of the media because it did not sell 160,000 copies as the previous album. OnLion Heart He turned back to its roots in classic soul a laMarvin Gaye. He was the same year co-owner of the recordResonateWhich in 1992 was sold to the international companyBMG. The same year sent Helmig his first English language albumRhythm. The sound was dominated by guitar with soul and a single number were visited byCut'N'Move's rapperMC Zipp the numberGood Time Rewind. Helmig also chose to do a cover ofBob Dylan Memphis Blues Again on the album.Rhythm was the first plate, which was published abroad, however, entitledThomas Helmig abroad, and this edition contains an English version ofGive me your mouth fromLion Heart.

In1993 released the album "Say When", which was recorded inLos Angeles and produced byJai Winding. The album harvested 3-Year Grammy awards.1994 was the year when Helmig got his big comeback with the album "Stupid Man". Title number andGotta Get Away From You countries were plagues, and the album sold 250,000 copies - an unprecedented figure in Danish music scene. He harvested 6-Year Grammy awards. Also this album was released abroad, without being any further success.

In 1995 he wrote and recorded 15 new songs, but scrapped it all and went toU.S.Where he collaborated with producerTimothy Christian Riley (Tony Toni Tone). In1996 released the album "groovy Day." The album that was recorded in the U.S. still contain some soul-inspired music, but was on the success of "Stupid Man" less well received. In1997 He published his first collection albumAre the years - the largest of the firstWhich contained the largest Danish hits. But the album also contains 2 new songs, which were the first English language songs, he had released since1990.

Thomas Helmig effort in an international breakthrough in the 1990s failed. But in return, he was once very popular at home, which in addition to the high sales figures reflected in the fact that he1996 became the first Danish musician who received a fanside online, Thomas Helmig Support.[1]

In spring1999 released album "Dream" which was a hit with the audience. In 2000, Helmig celebrated 15 th anniversary as a musician and released his second collection album, "Wanted", this time with the English-language hits.

In2001 udkom "IsItYouIsItMe" where Helmig re-returned to soul'en, but the album was not far well received among critics and fans. In2004 However, he turned back to the singer-songwriter style with the album "El Camino".

In 2004, Thomas Helmig appointedH.c. AndersenAmbassador and played for full houses on the year's El Camino-tour, which among others included five concerts at the Copenhagen gamingVega.

After having sung in English since 1990, released in November 2006 Helmig albumFrom here HelmigWhere Helmig partially returns to its typical 80's sound. The album was Sablet off notifiers to have banal text, but fans receipted on his back on the Danish and the plate has been double-platinum and has sold 100,000 copies. Thomas Helmig was nominated in four categories for the Danish Music Awards 2007.

He is top of the hat the artist in Denmark, who possesses the greatest Music Awards statuettes, and there may be among bla. noted singer of the year, year and year's hit album.


[edit] Privacy
Thomas Helmig was in 1985, under considerable media attention, married to singerSeas Fenger. His idol status was no less after marriage with Fenger, who was a great hope on the Danish rock scene. In 1988 he was divorced from Fenger after countless home Basques in gossip sheets. Thomas Helmig was in 1995 married to Heidi Andersen but the marriage went to pieces and the paired plates in 1997. In 2000 he married for the third time with pyskolog writerRen?e Toft SimonsenWho has a history as a model.

The family elected in August 2005 to move to Malaga in Andalusia sydspanske. In the summer2006 the couple moved back to Risskov.