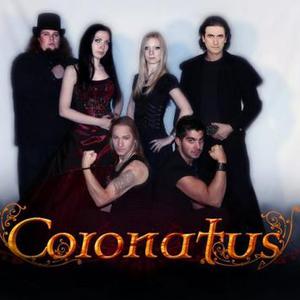 Gothic metal can be so bright! Coronatus demonstrates it with their two front ladies (e.g. Carmen R. Schaefer from the Illuminate cd "Zwei Seelen" and "Liquid Monster" from Brainstorm). The music is melodious, but includes at the same time rhythmic guitar riffs which give the music the necessary heaviness. That the ladies furthermore feature totally different voice types, making Coronatus absolutely unique.

Massacre Records (Crematory, Edenbridge...) contracted Coronatus in early summer 2007, so the release of the debut album "Lux Noctis" was on September 21, 2007. It had been recorded and mixed in the Klangschmiede by The Vision Bleak and was refined through a mastering in the Finnvox studio in Helsinki by Mika Jussila (Nightwish, Children Of Bodom...). Excerpts of "Lux Noctis" could be heard on several samplers, e.g. Gothic-sampler 38 as well as Zillo magazine february 2008 as well as the Hungarian Metal Hammer.

Coronatus have played live in Germany and Hungary, for instance with Haggard on the Gothica V.-festival, Weto and Illuminate in Germany and Within Temptation in Budapest.

Since the beginning of 2011 Mareike Makosch has sung the rock vocals and Lady Ada has been the soprano.

The band is working on the 4th album which is planned for 2011.

The Eminence Of Nature