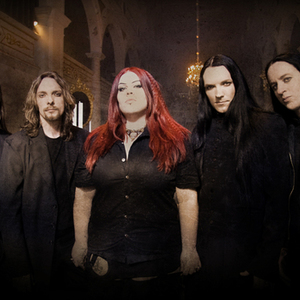 Angtoria is a symphonic metal band from U.K./Sweden, that formed in 2001 consisting of Sarah Jezebel Deva on vocals, Chris Rehn and Tommy Rehn on guitars, Dave Pybus on bass and John Henriksson on drums. Originally the group started as a pure orchestral project but they eventually moved on to the orchestral metal sound. In November 2001, singer Sarah Jezebel Deva (Cradle of Filth, Therion, Mortiis etc), and composer Chris Rehn (Abyssos) met on a mutual tour.

In November 2001, singer Sarah Jezebel Deva (Cradle of Filth, Therion, Mortiis etc), and composer Chris Rehn (Abyssos) met on a mutual tour. They soon became good friends and discovered both had the same ideas about working with a completely orchestral project, which led them to Angtoria. Chris composed the songs and Sarah wrote the lyrics and in November 2002 they recorded a 5 track demo at Virtual Symphony.

They sent out this demo to record labels, and interest for the new formed band grew quickly resulting in several top rated reviews, awards and interviews for magazines all over the world.

In November 2005 they started recording their debut album entitled "God Has a Plan for Us All" . After recording with several guests, the album was released at the end of April 2006 on Listenable Records.

God Has A Plan For Us All