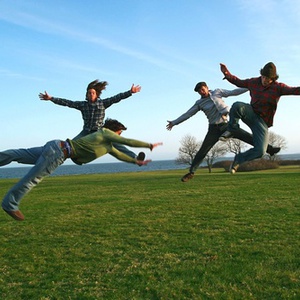 In the small New England town of Mystic, Connecticut, lives Barefoot Truth, an independent band that is quietly creating history. You have never seen them on MTV, nor heard them on a Top 40 FM radio station, but with over 7 million spins on Pandora, Barefoot Truth has quickly become a symbol of independent music success, and just may be 'the biggest band you've never heard of'. Mixing the sounds of folk, rock, jazz, and reggae, with lyrics full of unbridled optimism, the band has crafted a sound that is distinctly Barefoot Truth.

Since the band's establishment during college, Barefoot Truth has been developing this signature sound that has virally spread through a grassroots following. With their lead singer on drums, and an array of unlikely roots-based instrumentation, the band translates their originality to their ever-evolving live show. The quintet features Will Evans on lead vocals and drums, John Waynelovich on piano, Jay Driscoll on Weissenborn slide guitar, Andy Wrba on upright bass, and Garrett Duffy on harmonica. It is not unlikely for members of the band to switch instruments mid-show, or even begin playing a didjeridoo, adding to the dynamic of the band's sound.

Mixing a strong environmental message with the lofty theme of humankind's interconnectedness on their 2010 studio album 'Threads', Barefoot Truth reached #21 on the iTunes Rock Charts, momentarily stepping ahead of bands such as Dave Matthews Band and The Fray. The new disc was noted as "The best independently released album of 2010" by ThisIsModern. Barefoot Truth happily credits Pandora Radio for their crucial role in growing the band's silent army of listeners, as Driscoll recently stated in a USA Today article, "Pandora has basically created an avenue for us to have a career in music".

Since taking the band 'full-time' in 2007, after finishing college, Barefoot Truth has earned spotlight attention on many levels, including an invitation to play at President Obama's pre-debate rally in New York, where they performed between Bruce Hornsby and Crosby and Nash. They were asked to lend several songs from their new album 'Threads' to the internationally acclaimed film 'Nature Propelled', in addition to scoring original music for the film. Barefoot Truth also lent their song 'Threads' to the video game 'Rock Band' (MTV Games). The band has also made appearances at major festivals such as Summerfest, 10,000 Lakes Festival, and FloydFest, in addition to tallying over 100 college and prepschool performances in the Northeast. Fans of Barefoot Truth can be confident that the quiet success of this small band will grow increasingly louder, one listener at a time...

Changes in the Weather