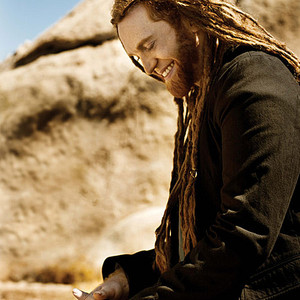 Sam Newton Battenberg Faulkner (born January 11, 1985) is an English singer-songwriter and musician from Reigate, Surrey, UK. Known for his rhythmic guitar playing, Faulkner came to prominence in 2007, with the release of his debut studio album, Hand Built By Robots. The album was certified double platinum in the United Kingdom, and yielded the singles, Dream Catch Me, I Need Something and Teardrop. Following an accident, which resulted in his right wrist shattering, Faulkner released his second studio album, Rebuilt By Humans in 2009.

Faulkner began playing guitar at the age of 11-12 with session guitarist Bob "crazy guy" Cranham and also attended the Academy of Contemporary Music in Guildford, where he spent 2 years gaining both diploma and the higher diploma award under the tutelage of Eric Roche.

His first band was a Green Day cover band, in which he played bass guitar. His experience on the stage grew as he formed Half A Guy, a funk rock group with a quirky edge, with fellow band mates Matt Buchanan, Dave Elvy and Nicola Crawshaw. Half a Guy recorded two demo CDs and managed 2 years before splitting. He then spent time recording and gigging under the name Newton Battenberg Faulkner, where he played the Lapagestock festival on the 11th June 2005.

Recent appearances on BBC Radio 2 as well as a publishing deal with Peermusic UK compelled the Independent on Sunday to tell its readers to "Watch this face". Faulkner performed at the 2006 South by Southwest music festival and at Guilfest 2007.

In 2006 he had a support slot for Steve Forbert at The Spitz in London, England.

Newton has recently been signed by [labelSony BMG records and on the 30th of July 2007 he released his debut album Hand Built By Robots. He supported James Morrison on his February UK tour as well as Paolo Nutini on his UK tour in April, and also John Mayer on his September dates in the United Kingdom. He also supported The John Butler Trio on a number of European dates.

In June 2007 Newton's second single Dream Catch Me was selected Jo Whiley's 'Pet Sound' on her daily Radio 1 show. This gave the track much exposure and was highly commented on by listeners to Jo's show.

Newton appeared twice at the Glastonbury Festival in June 2007 - once on the Friday on the Acoustic Stage and once on the Sunday on the Leftfield Stage. He appeared at V Festival 2007 in August where he played in the Virgin Mobile Sessions Tent - a venue much too small as people overflowed outside. He also appeared at the Connect Music Festival at the end of August 2007 on the Guitars and Other Machines stage

On July 29, Dream Catch Me entered the UK Singles Chart at number 16. The following week it had risen to number 7 with Hand Built By Robots entering the album charts at number 3. The song rose to #8 on 12 August, the album to number 1 on 26 August.

Eric Roche is undoubtedly one of Newton's biggest influences, both from a stylistic point of view (vis a vis the percussive use of the guitar's body) and through the use of tapping, uncommon tunings and inventive chord changes, such as in I Need Something and Ageing Superhero, from his debut album. This method of playing also shows heavily in the work of Jon Gomm and Pete Wailes, although with a slightly different feel in both.

The Very Best Of Newton Faulkner... So Far CD2

The Very Best Of Newton Faulkner... So Far CD1

Write It On Your Skin (Deluxe Edition)