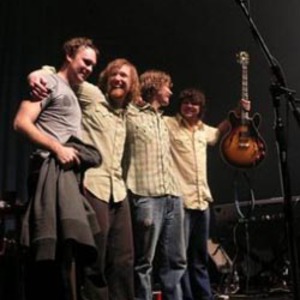 The band has steadily gained momentum and picked up new fans since their eponymous debut album Tea Leaf Green in 1999. Their music is a mix of Jam, classic rock, Folk, Singer/Songwriter, and Jazz. However, labeling this group proves to be more difficult than one might expect. When asked how they would describe themselves, they often respond that they are a "Rock n' Roll band" and they released a live album and DVD called Rock 'N' Roll Band. Their ability to pull off a wide variety of styles makes their music dynamic yet always recognizable. The distinct voices of Trevor Garrod and Josh Clark contribute to stylistic identity and diversity, with Trevor singing lead vocals the majority of the time.

Next Tea Leaf Green released Midnight On The Reservoir.

In 2003 Tea Leaf Green released Living In Between.

In 2006 Tea Leaf Green released Taught to Be Proud on their own record label, the fourth and final album with founding band member Ben Chambers on bass.

In 2008 Tea Leaf Green released Raise Up The Tent on Surfdog Records, recorded 2 weeks after Reed Mathis joined the band on bass.

In 2011 Tea Leaf Green released Radio Tragedy! on Independent, the first TLG studio album with dual drummers with Cochrane on drums and percussion.

Join up with fellow leafers on the forum and find more info at http://www.tealeafgreen.com.

Raise Up The Tent

Taught To Be Proud