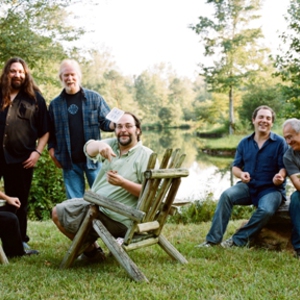 Michael Houser and John Bell ('JB') met at the University of Georgia at Athens between 1982 and 1984, and began playing music together around town as a duet. JB played solo shows as well. In the Fall of 1984, David Schools saw JB play a solo show at Abbots in Athens. Dave and JB were introduced by a mutual friend. Shortly thereafter, JB & Mike recruited Dave to play bass with them, and from Mike's nickname ("Panic"), the band name Widespread Panic was chosen. On February 24, 1985 the band played their first performance as Widespread Panic at the A-Frame house on Weymanda Court in Athens. Mike, JB, & Dave performed around Athens as a trio, occasionally utilizing local drummers. While their shows consisted primarily of cover tunes (by the likes of The Grateful Dead, Van Morrison, Bob Marley, and Traffic, among others), their repertoire did include a handful of original songs: Sleepy Monkey (the band's first original composition), Chilly Water, Space Wrangler, and Coconut (written by JB before joining the band). During this time, the trio also met vocalist Kelly Jo Davis (who is later married to blues guitarist and friend of WP, Tinsley Ellis). Kelly Jo performed frequently with the band throughout 1985 and 1986.

February 6, 1986, Mike recruited high school friend/band mate Todd Nance for a WP gig (an Aid For Africa benefit) at the Mad Hatter Ballroom in Athens, opening for Strawberry Flats (featuring John Keane). This is considered the first "official" Widespread Panic show. Todd evidently had a good time, and accepted their offer to join the band. On February 9, 1985, Mike, Dave, and JB, with Joel Morris on drums and Kelly Jo Davis on backing vocals, recorded Monkey Image (Sleepy Monkey) and Coconut Image (Coconut) at Panoramic Recording Studio in Arnoldsville GA, to be released as their first single. The 45rpm vinyl was released (in a pressing of only 500) shortly thereafter on the band's Space Baby label.

During the rest of 1986, WP played mainly in Athens, though they did branch out to venues in Macon, GA and South Carolina. Early on, they began playing every Monday night at the Uptown Lounge in Athens, a tradition that would last well into 1988. Along the way, they developed a solid batch of original tunes (in addition to the four originals that they played in 1985), including Stop-Go, C. Brown, Tie Your Shoes, Porch Song, Driving Song, Conrad, Vacation, Postcard, the instrumental Machine, and another instrumental jam that JB later adds lyrics to, titled Cardboard Box. On October 6, 1986, Texan percussionist Domingo S. Ortiz ("Sunny"), sat in with the band at the Uptown Lounge for the first time. Sunny continued to perform with the band on numerous occasions in Athens, Macon, and Atlanta, and eventually (late 1988 or early 1989) accepted the band's request for him to join as a full-time member.

During 1987, WP continued to play primarily in Georgia, while steadily spreading out to SC, NC, AL, TN, and as far north as Richmond, VA (Dave Schools' hometown). They developed a few more originals along the way, including Barstools & Dreamers, Contentment Blues, I'm Not Alone, and instrumentals L.a. (aka "Liza's Apartment"), and The Take Out. JB added lyrics to Cardboard Box, and to another instrumental titled "Puppet Song", subsequently renamed Pigeons. Cardboard Box was only played a handful of times before being dropped from the repertoire. In the Fall, the band signed with Landslide Records and recorded their first album, Space Wrangler, at John Keane's Studio in Athens. Guests on the album included Sunny on percussion, David Blackmon on fiddle, Tim White on keyboards, and Alberto Salazarte (of Athens band White Buffalo) on percussion.

Their debut LP, Space Wrangler, established a small fan base and inaugurated several years of constant touring before the band signed to Capricorn Records and released their major label debut, Widespread Panic in 1991. After appearing with the H.O.R.D.E. tours for a few years, the band became one of the most popular new jam bands that arose in the mid-1990s. Their popularity peaked in the late 1990s/early 2000s, as their concert draw benefited from Phish's temporary hiatus. They still have a large draw in the South, where they are most popular.

Playing as many as 250 shows a year, Panic built a large fan base. True road warriors, Widespread Panic ranked among the top 50 grossing touring acts for eight years running, even without substantial radio airplay, television exposure, or promotion at retail stores. The band holds sellout records at Red Rocks Amphitheatre near Denver (23 shows), Oak Mountain Amphitheatre near Birmingham, Ala. (17 shows), Philips Arena in Atlanta (11 shows), and UNO Lakefront Arena in New Orleans (18 shows). Not to mention 20 sellouts at San Francisco's Warfield Theatre, seven sellouts across the Bay at the Greek Theatre in Berkeley, nine sellouts at Mud Island in Memphis, seven at Memphis' Mid-South Coliseum, and in October 2003 for the popular Halloween shows sold out two concerts at New York's famed Madison Square Garden. To celebrate the release of their first live album, Light Fuse, Get Away, Widespread Panic offered a free "CD release party" concert in the streets of hometown Athens. An estimated 100,000 fans descended on the town, transforming it into the largest CD release party in history.

In August 2002, founding guitarist Michael Houser lost his battle with pancreatic cancer. George McConnell, a long time friend of the band and former Beanland,a Mississippi roots band, member joined in Houser's wake. After Hermann had joined Panic in 1992, McConnell often sat in whenever Panic played in the south. Friends for the past 15 years, Panic and McConnell had often played on the same bill for nearly as long. That longstanding relationship made him the natural choice to continue on with Panic after Michael Houser's death from pancreatic cancer in August of that year. "It's all about chemistry," Schools said. "We've been friends for 15 years." At the end of the summer tour, Panic went back to the studio to record Ball, a testament that, as Houser wished, they would continue as a band.

On August 2, 2006, the band announced that George McConnell would no longer be playing with the band. John Keane, friend and co-producer of many of the bands albums, provided guitar support for the remainder of the tour, along with Sam Holt. Both had been featured contributors in Widespread Panic concerts since the beginning of the Summer 2006 tour. The following day, the band announced that guitarist Jimmy Herring, who had previously been a member of the 1990s band the Aquarium Rescue Unit and had toured with The Allman Brothers Band and members of The Grateful Dead, would join the band, beginning with the first show of the Fall 2006 tour at Radio City Music Hall in New York City, New York.

The band has sold over 3 million albums, and released a total of 15 CDs and five DVDs (including Live at Oak Mountain, which is certified Gold).

In June 2006, their 9th and most recent studio album, Earth to America, was released. Earth to America was recorded with Terry Manning in Nassau, Bahamas at the beautiful Compass Point Studios.

In late 2006, Fayetteville, NC native Jimmy Herring took over the reins of the lead guitarist in the band, kicking off their fall tour with three nights at Radio City Music Hall in New York City, New York.

Panic's 7th annual New Year's shows on December 30 and 31 of 2007, marked their 15th and 16th sellout performance at Philips Arena.

The band released their 10th album, Free Somehow, on February 12, 2008. It, too, was recorded with producer Terry Manning at Compass Point Studios.

Following the release of the new studio album, Widespread Panic began to release vintage concert performances from the Widespread Panic Archives. Carbondale 2000 was released on June 10, 2008, followed by Valdosta 1989 released on February 24, 2009, and Huntsville 1996 released on June 23, 2009. The band will continue to dig into their show archives, which encompasses the past 25 years, and release these shows as multi-track recordings.

June 27, 2008, marked the band's 32nd sold-out show at Red Rocks Amphitheater. This was more than any other band in the venue's history. Mayor John Hickenlooper proclaimed Friday, June 27 "Widespread Panic Day" in the City and County of Denver. The same year, Widespread Panic was inducted into the Georgia Music Hall of Fame on September 20.

The band continued to tour throughout the rest of 2008 and the spring of 2009. In the summer of 2009, Widespread Panic teamed up with fellow southern rockers, The Allman Brothers to do a summer and fall co-headlining tour.

In March 2010, it was announced that Widespread Panic would be releasing a new album entitled Dirty Side Down on May 25, 2010. The band is also releasing Live in the Classic City II, containing music from its 2000 shows.

On September 29, 2010, Widespread keyboardist Jojo Herman announced that the band would be going on hiatus in 2012. In an interview with the Vanderbilt Hustler, Herman explained, "Next year will be our 25th anniversary. After that, we're probably going to call it (quits) for awhile. So we're looking forward to next year and going out on a high note."