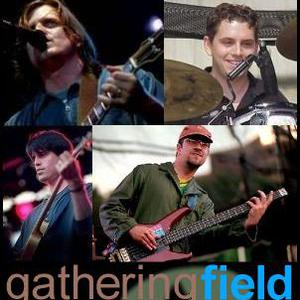 The Gathering Field line-up ultimately became Bill Deasy vocals and acoustic guitar), Dave Brown (lead guitar), Eric Riebling (bass) and Ray DeFade (drums). (After DeFade left the group he was replaced with Joe Zelek.) Their first independent release, entitled "The Gathering Field", was met with great reception around the region and they started playing to packed clubs. However, the band's popularity really skyrocketed when one of the region's most powerful rock radio stations, WDVE, began playing a song called, "Lost in America" and it remained in rotation for over 7 months. Based on the success of the independent release which bore the same name, the group garnered a major label deal with Atlantic Records, who re-released the CD.

Soon after they signed to Atlantic Records and "Lost in America" was re-released, there was turmoil at the label. The album charted on the Billboard Top 100 album chart, Radio and Records and various other industry publications but ultimately the CD and group got lost in the shuffle, largely due to Matchbox 20. When Matchbox 20 signed, the Gathering Field was forgotten, and the struggling band attempted to be released from their contract. When they finally succeeded, they released two more CDs; "Reliance" and "So Close to Home," the latter consisting of songs the band had played live for several years but never recorded. During that time Deasy also released a semi-acoustic solo album called "Spring Lies Waiting", produced by Brown. The band ultimately called it quits in 2002 and went their separate ways but their legacy includes a still loyal fan base across the United States and in several countries abroad, most notably (but not limited to) the Netherlands and Germany, where they received a stellar review in that country's edition of Rolling Stone. Lead singer-songwriter Bill Deasy now records as a solo artist and continues to be a prolific songwriter. His songs have also been recorded by several major label artists and used in a national television campaign for Good Morning America in which he also appeared.

So Close to Home