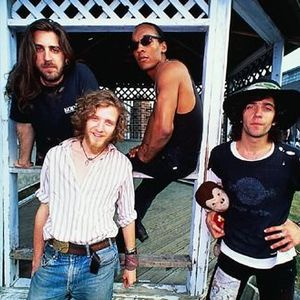 The Spin Doctors is a rock group from New York, USA, best known for its 1992 hits, "Two Princes" and "Little Miss Can't Be Wrong", which charted at #7 & #17 on the pop chart, respectively. The album that included those songs, Pocket Full of Kryptonite, sold poorly until MTV and radio began playing the songs. The album eventually went gold, and then received another boost in sales after the band's appearance on Saturday Night Live in October 1992, ultimately selling five million copies in the United States and peaking at #3 on the Billboard top 200 album chart.

The band also made an appearance on Sesame Street, singing a modified version of Two Princes which emphasized the importance of sharing.

The history of the Spin Doctors can be traced back to the late 1980s in New York City, originally as a band called Trucking Company, which included Canadian guitarist Eric Schenkman, John Popper, and later Chris Barron, who was John Popper's Princeton, New Jersey high school friend. Popper left this side project to focus on his main gig with Blues Traveler full time. With a name change to Spin Doctors, as well as the addition of Aaron Comess and Mark White, the classic lineup was in place by the spring of 1989.

Turn It Upside Down (1994) was not as successful as 'Kryptonite', although it did sell a million copies and its second single, "You Let Your Heart Go Too Fast", was a modest hit (#48 on the pop chart). Shortly after the release of Turn It Upside Down, original guitarist Eric Schenkman left the band, citing both musical and personal differences. He was replaced by Anthony Krizan.

The follow-up, You've Got to Believe in Something (1996), sold poorly and the band lost its record contract. Guitarist Krizan also left the band following its release, for reasons that remain relatively unknown. He was replaced by Eran Tabid. Also during this time, Ivan Neville joined the band on keyboards. In 1998, the band signed to Uptown/Universal and released Here Comes the Bride in 1999. During the recording of Here Comes The Bride, Mark White left the band. The bass tracks on the album were finished by original band member Aaron Comess.

During the tour supporting Here Comes The Bride, Chris Barron lost his voice due to a rare form of vocal cord paralysis. Keyboardist Ivan Neville took over vocal duties for a few dates, but the band eventually cancelled the remainder of its tour, crippling sales of the album. Chris' voice came back in late 2000, where he began performing with his band Chris Barron and the Give Daddy Five.

The Spin Doctors remained stagnant until 2001, when the closing of the famous New York City club Wetlands brought the original four members back together. The band started playing one-offs and eventually recorded an album, Nice Talking To Me, released on September 13, 2005. So far, the album has yet to be met with much commercial success. They have also made a guest appearance on the children's book and its accompanying album by Children's Author/Artist Sandra Boynton singing "Tantrum".

If The River Was Whiskey

Nice Talking To Me

Two Princes: The Best Of

Just Go Ahead Now: A Retrospective

You've Got To Believe

You've Got To Believe In Something

Turn It Upside Down