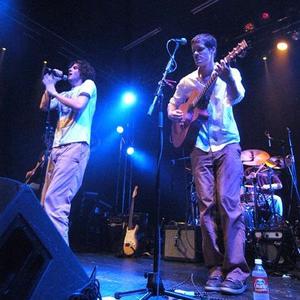 In today's pop culture world, in which music ?idols? are auditioned, judged, anointed and frequently forgotten within the span of a few months while even ?underground? acts can stir up buzz overnight on the blogosphere, the notion of a band building an audience by actually working its tail off seems positively antiquated. So go ahead and call Austin's Nelo (rhymes with ?hello?) just a little bit old-fashioned.

Long before Nelo released their 2nd album, ?Ordinary Scene?, songwriter/bandleader Matt Ragland and the rest of his crew were already seasoned road veterans accustomed to playing to packed crowds across Texas and throughout the South.
Nelo formed officially in late 2005 after Matt Ragland and Reid Umstattd, who were college roommates, graduated from the University of Texas. After formation, the band spent not quite a couple years in Athens, GA and then moved back home to Austin, TX to start recording and touring. Picking up new fans one by one along the way, Nelo has shown that the grassroots approach still does work. On top of working its way into playing regularly at large venues in Texas like The House of Blues (Dallas and Houston), Granada Theatre (Dallas), Antones (Austin) and more, the band has also played in the Austin City Limits and South by Southwest music festivals. Nelo has supported acts like Sister Hazel, Ghostland Observatory, Everclear, Pat Green, Bob Schneider and more and has also recorded with Doug Lancio (Patty Griffin, John Hiatt) and C.J. Ericksson (U2, Steve Lillywhite).
Each member of Nelo brings a vital component to the eclectic nature of the band and that certain je ne sais quoi element their music possesses. Matt Ragland composes and creates, while adding a dynamic depth to the music through piano and rhythm guitar. Reid Umstattd provides the soulful and inimitable lead vocals, characteristic to only Nelo. Brian Donohoe diversifies the mix with supportive keyboard and virtuosic saxophone. Sean Jacobi shapes the melody's backbone with clear attention to musical detail and dynamics on the bass guitar, and Ryan Jacobi confidently drives each song with his own brand of charisma and energy on the drums.

Today diehard fans can finally get their Nelo fix from ?Ordinary Scene?, Nelo's new 2nd album, which is anything but ordinary. Nelo staked the #21 spot on both the Billboard Magazine ?New Artist Album? and Heatseekers charts with their self-titled debut album, and it is no doubt ?Ordinary Scene?, their most dynamic work yet, is on its way to surpassing the underground legacy. ?Ordinary Scene? debuted at #3 on the top rock albums chart on Itunes. Determined to do this one right, songwriter Matt Ragland produced the record himself, and the band made no compromises in the recording process. Tunes as indelibly catchy as ?Hey Birdie? and ?Do You Love Me? demand to be heard and enjoyed more frequently than even the most hard-gigging of bands can accommodate ? and computer speakers just don't do justice to tunes this organically structured. Gritty, colorful and textural, one can find something new in the music with every listen. The result: an album you like more and more each time you hear it. ?Ordinary Scene? eloquently packages a seamless instrumental mix of rock, pop, and jazz that is thoughtfully woven into an experience that will leave listeners soaring. Nelo's ability to matchlessly combine these multi-genre elements is what seduces the cravings of their fanatic followers. The composition and the lyrics join forces to take the listener on a journey of discovery and growth, while, according to Soundcheck Magazine, still maintaining the ability to be ?perfect as a soundtrack to a river float or a tailgate party before a football game.?

Much like the music itself, the main lyrical theme found clearly in the title track and consistently throughout the album dives deep into the human experience. When asked about the album's title track, Ragland explains: ?The ?ordinary scene' is the scene in which you see that person you love everyday- in the same context, same clothes, same hours of the day, same backdrop etc. It's frustrating when the initial spark of newness with someone is gone. But somehow in so many cases the love deepens and authenticates when things settle down a bit. It's as if this new kind of nurturing excitement replaces the old blinding spark with a warm and consistent glow. And it's more powerful than before. You can't really find it amidst the whirlwind of buzz in a brand new love. It only happens inside of an ?ordinary scene'. I think I kind of talk about or around this idea throughout the whole record.? Ragland jokes: ?I need to take my own advice!?


?Ordinary Scene? and ?Two Years Ago E.P.? are available for purchase on iTunes and Amazon, and tour dates can be found at www.nelomusic.com. What's most remarkable of all when it comes to this band is the fact that when listening to their music, for all the years that these guys have played together, for all the thousands of fans they've already won through literally hundreds of shows and word-of-mouth-fueled grassroots enthusiasm, one gets the distinct feeling that Nelo's journey has only just begun.