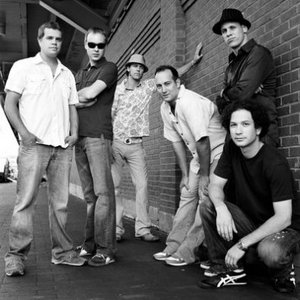 Umphrey's McGee is a progressive rock / jam band from South Bend, IN now based in Chicago, IL. They are influenced musically by progressive rock bands such as King Crimson, Yes, Dream Theater, and Genesis, as well as heavy metal bands such as Iron Maiden. The band also identifies The Police, The Beatles, Pink Floyd, and Led Zeppelin as primary influences. However, there really isn't a style of popular music that Umphrey's does not cover. Artists covered in concert by Umphrey's range from Lionel Richie to Metallica to Toto to Snoop Dogg to Paul Simon.

They are influenced musically by progressive rock bands such as King Crimson, Yes, Dream Theater, and Genesis, as well as heavy metal bands such as Iron Maiden. The band also identifies The Police, The Beatles, Pink Floyd, and Led Zeppelin as primary influences. However, there really isn't a style of popular music that Umphrey's does not cover. Artists covered in concert by Umphrey's range from Lionel Richie to Metallica to Toto to Snoop Dogg to Paul Simon.

In mid-1998, the band released their debut album complete with a tongue-in-cheek title, Greatest Hits Vol. III. The group decided to record an album immediately because it was easier to get live gigs with an official CD. Long out of print, the album contains many of Umphrey's future concert warhorses, such as Divisions and All In Time.

Shortly after the release of the album, the band added a fifth member, percussionist Andy Farag. Farag's father became the band's agent, and a second pressing of Greatest Hits Vol. III featured Farag in the album's inner sleeve and credits. By the end of the year, Umphrey's McGee, along with peers Ali Baba's Tahini, were one of the most popular bands in the South Bend/Notre Dame area. They began performing outside of the area at colleges and house parties, allowing listeners to tape and trade their music freely. By 1999, the band had gained notoriety outside of Indiana, especially with the release of the live album Songs For Older Women, which featured live tracks recorded over a two-night stand in November 1998.

The addition of Jake Cinninger in September 2000 helped bring the band's musical dynamic to a new level. Cinninger, an accomplished guitarist, brought a distinct heaviness to the Umphrey's sound, as well as a large repertoire of original music, much of which comprised the bulk of the catalog from his previous band, Ali Baba's Tahini. The band also adopted several songs written by Ali Baba's Tahini frontman Karl Engelmann (who now fronts Asheville-based rock band Mother Vinegar). Another live album, One Fat Sucka, was released shortly after, containing live performances recorded in the summer and fall of 2000.

Around 2001, the band began practicing intense improvisational exercises. One of their first productive jam sessions took place in a hotel in the "Jimmy Stewart Ballroom" during the wedding of fan/website designer Jeremy Welsh. Therefore, the band began to call their onstage improvisational excursions "Jimmy Stewart." This form of improvisation differs in approach from the methods utilized by many of their jam band peers and has been extensively outlined by "McL" in the "Jimmy Stewart writeup" on the fan message board known as "The Bort" at www.umphreaks.com.

2002 saw the release of the band's first proper recording, Local Band Does OK. That summer, Umphrey's was invited to play the first annual Bonnaroo Music Festival which took place in rural Manchester, TN, and featured over 30 bands performing in front of nearly 100,000 people. Umphrey's played to their largest audience to date and ended up selling more CDs than any other artist on the bill including Widespread Panic, Trey Anastasio, and Norah Jones.

In October 2002 drummer Mike Mirro announced he was leaving to attend medical school. After hundreds of tapes were reviewed by percussionist Andy Farag, the band settled on the first one they received, which was from Kick the Cat drummer Kris Myers, who has a masters degree in jazz drumming from DePaul University.

In 2004, the band released the critically-acclaimed album Anchor Drops, recorded in several different studios throughout the Chicago area. Shortly before the release of the album, the band scored a distribution deal for both Anchor Drops and Local Band Does OK, and for the first time, Umphrey's music was available in stores all over the country. Anchor Drops received rave reviews from several high-profile magazines. Umphrey's was booked to play the Bonnaroo Music Festival once again in June but unlike their 2002 performance, this time they would play a coveted late-night spot. The band performed to over 20,000 people, many of whom had never heard the band before. Shortly after in July, Umphrey's was declared by Rolling Stone Magazine to "have become odds-on favorites in the next-Phish sweepstakes."

In April 2006, Umphrey's released their fourth studio effort, Safety in Numbers. They appeared on the late night TV program Jimmy Kimmel Live in May and were featured at many of the major U.S. festivals throughout the summer, playing 129 shows before a three-night stand in Chicago for New Year's Eve. The Bottom Half, an album of leftover tracks from the Safety in Numbers sessions, was released a year later in April, 2007. It was supported with tours of the U.S., Europe, and Japan.

A live double-album titled Live at the Murat was released in October, 2007. The album was recorded over 2 nights at the Egyptian Room in the Murat Centre in Indianapolis, Indiana on April 6-7, 2007. It received a 4-star review from Rolling Stone Magazine. The album also won a Jammy for best live album. Another live double album release came in June 2008, when the band put out Jimmy Stewart 2007. The album consisted entirely of live, improvised "Jimmy Stewart" sessions recorded in 2007.

Umphrey's McGee completed work on their next studio album, Mantis, in late 2008. Recorded mainly in Manny Sanchez's I.V. Lab Studios in Chicago, the band members began by presenting each other with CDs containing hundreds of musical ideas they'd composed over the past dozen years, which were then shifted and trimmed down to the concise tracks that appear on the album. The band's longtime sound caresser, Kevin Browning, edited and mixed the album's material.

Mantis became available for pre-order on October 27, 2008. Along with the pre-order announcement came information that unique bonus content would be available and more content would unlock depending on how many pre-orders were placed. This unusual method of distribution has been hailed as the "perfect way to implement a pre-order campaign" by Reuters.com.

Mantis was released on January 20, 2009. The album marked Umphrey's second decade together as a band and was the first Umphrey's album to consist entirely of material never previously performed on the road.