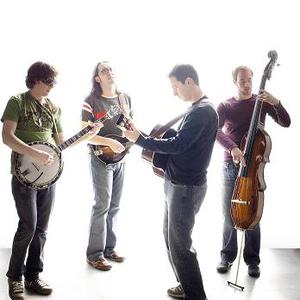 Yonder Mountain String Band Biography, June 2009 Yonder Mountain String Band has always played music by its own set of rules. Bending bluegrass, rock and countless other influences that the band cites, Yonder has pioneered a sound of their own. With their traditional lineup of instruments, the band may look like a traditional bluegrass band at first glance but they've created their own music that transcends any genre.

Dave Johnston points out ?What could be more pure than making your own music.? Yonder's sound cannot be classified purely as ?bluegrass? or ?string music? but rather it's an original sound created from ?looking at music from [their] own experiences and doing the best job possible.? The band continues to play by their own rules on their new record The Show.

The Colorado-based foursome has crisscrossed the country over the past eleven years playing such varied settings as festivals, rock clubs, Red Rocks Amphitheater in the band's home state, and recently the Democratic National Convention in Denver at Mile High Stadium opening for Barack Obama. Their loyal fanbase has been built from this diverse setting of music venues as fans latched on to their genre-defying original sound.

In between tours the band spent time this last year working on its fifth studio album. Set for a September 1 release on the band's own label, The Show is the second album with rock producer Tom Rothrock (Beck, Elliott Smith, Foo Fighters). While some might scratch their heads as to why a string band would want a rock producer, this decision was a natural choice for the band. ?We don't have a lot of nostalgia for the past,? says banjo player Dave Johnston. ?You shouldn't try to recreate the 1940s. I like to think of us as informed by the past and all the great performers before us. But we also want to look forward rather than give people something that has already been perfected.?

The Show has the similar acoustic instrumentation (Adam Aijala on guitar, Johnston on banjo, Jeff Austin on mandolin and Ben Kaufman on bass with all four singing) as many of its classic bluegrass forefathers. Though once again drums are present (as with the self-titled fourth album) with the great Pete Thomas of Elvis Costello's bands adding a rhythmic backdrop to Yonder's still-acoustic sound on six of the tracks. The record consists of thirteen songs all written by Yonder.

The band has long cited such varied influences as the bluegrass of Del McCoury, Johnson Mountain Boys, Jimmy Martin, Bill Monroe, Osborne Brothers as well as the punk rock of Bad Religion, Black Flag and the Dead Kennedys. Somewhere in between these two tent poles are early 20th Century composers and alternative rock bands like Grandaddy and Postal Service. It's all funneled through the band's unique chemistry, honed since they first met at an informal club performance in 1998. With band members writing individually, in different pairings and as a collective, the album proves that this group is a collection of creative peers and you can hear it in the rich tapestry of music that makes up The Show.

Here Yonder offers such traditional bluegrass sounding fare as ?Out Of The Blue? and ?Casualty.? The band has explored its country roots in the past and does so again this time on ?Steep Grade, Sharp Curves,? a song that describes the roads around its home base in Nederland as well as a particularly dangerous femme fatale. A little further from the roots is the impressionistic ?Isolate? with its simple but ominous bass line and minimal arrangement. There is also a bevy of rockers like ?Complicated,? ?Fingerprints? and ?Belle Parker,? a gem of a song about a hard-hearted woman. The band even finds some excellent middle ground between bluegrass and rock on ?Fine Excuses? thanks in part to a scorching guitar solo from Adam Aijala. There is also the extended ?Honestly? -- at eight-minutes, the longest song on the album, with a middle section that is an excellent platform for lengthier live excursions that are as improvisatory as any electric band on the live music circuit.

The band is a regular at bluegrass festivals like the Telluride Bluegrass Festival and the band's own Northwest String Summit as well as massive multi-stage events like Austin City Limits Festival, Bonnaroo and Rothbury. Fans are no doubt drawn to Yonder's anything goes attitude, its humor and passion about music, and the band's ability to stretch out live. ?We love that people come to see us,? Johnston points out. ?Everyone appreciates good music. Some people want to go to a recital and some people want to party.?

But as its fans know, Yonder Mountain String Band does something a little different, more than just a musical party. The Show is the band's most varied and versatile album to date, and the summation of the journey that these guys are on together. It's bluegrass for the masses, acoustic tunes filled with dazzling chops, and it's fun to boot. The humble Johnston sounds as surprised as anyone by the band's success, but knows that it all boiled down to chemistry, which has never changed. ?Somewhere down there we all kind of recognized that we had something unique,? he explains. ?But there is no way I could have imagined the amount of success that the band has had.?